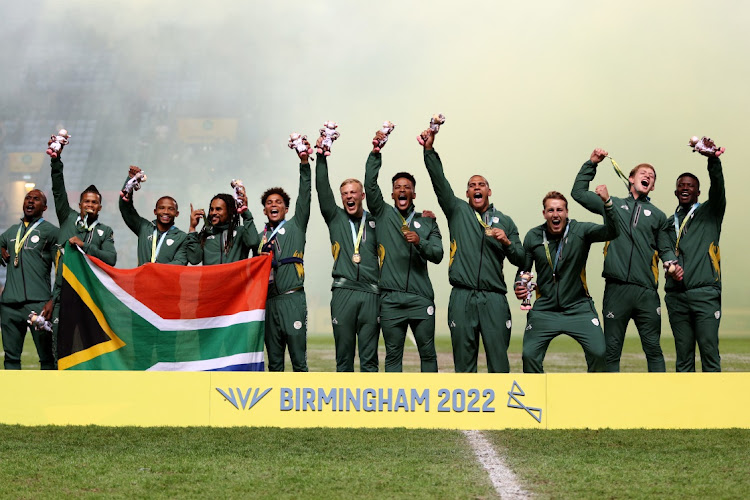 The Springbok Sevens team won the gold medal at the Rugby Sevens event of the Commonwealth Games when they produced a brilliant performance to defeat Fiji 31-7 in a pulsating final on Sunday evening in Birmingham, where New Zealand claimed bronze.

The SA Women’s Sevens team comfortably beat Sri Lanka by 52-0 to conclude the tournament on a high, finishing in seventh position, which is one spot better than in 2018 in Australia and made Paul Delport (coach) smile as he knew his inexperienced squad were facing a huge task in England.

Meanwhile, the Blitzboks played the final without the dynamic playmaker Ronald Brown, who was injured in the semifinal win over Australia earlier in the day, while regular skipper Siviwe Soyizwapi was also out injured and didn’t play at all on Sunday.

Zain Davids, who took over the captaincy, said: “I have a little bit of mixed emotions at the moment, but mostly I’m happy as we came out here and gave our all, and I think we can be very happy with our performance against a great team like Fiji.

“When ‘Shakes’ got injured, I had to take over the captaincy and I was happy to do that, because I know the guys support me, but I also knew that in this team you don’t really have to be a captain as you have a bunch of guys behind you that’s helping and supporting you.”

The South African men’s side made a great start to the final and scored three well-worked tries in the opening half while keeping the dangerous Fijian runners in check with excellent tackling and great counterattacking play.

They deservingly led 17-0 at the break in the Coventry Stadium, while in the second half they combined their heroic defensive effort with equally great finishing performances. Muller du Plessis opened the scoring from a pinpoint Selvyn Davids cross-kick, an early sign of things to come.

JC Pretorius scored the second in the same corner after a sustained passage of attacking play, with SA looking well after the ball in contact. That put them 12-0 ahead.

Shaun Williams scored the third try as the menacing Pretorius stole another crucial turnover to put the little speedster away, the try handing SA a 17-0 halftime advantage.

After the break, Du Plessis then ran in for his second off an excellent cut-out pass from Selvyn Davids. Williams nailed the angled conversion to stretch the lead to 24-0 and left Fiji with a mountain to climb.

Fiji eventually got on the scoreboard when Nacuqu went over for converted try to reduce the deficit to 27-7.

But the Blitzboks were not to be denied. Mfundo Ndhlovu scored the final try with seconds remaining to seal a brilliant gold medal performance, denying Fiji the remaining major title that have escaped them at previous Commonwealth Games.

SA also won the gold medal at the 2014 Commonwealth Games staged in Glasgow.