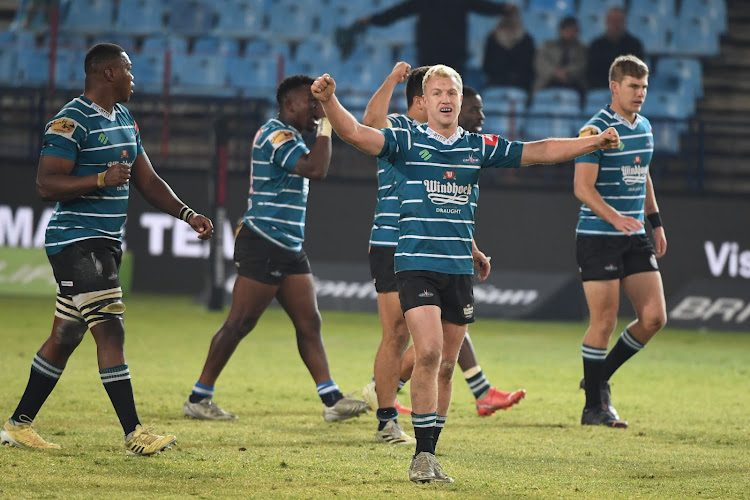 Johan Mulder of the Griqaus celebrates during the Carling Currie Cup semi-final match against the Bulls at Loftus Versfeld on June 17 in Pretoria.
Image: Lee Warren/Gallo Images

Utility back George Whitehead came off the bench to inspire the Griquas to secure a place in the Currie Cup final as the men from Kimberley defeated the Bulls 30-19 in their semifinal clash at Loftus Stadium in Pretoria on Friday night.

Whitehead scored 18 points after he replaced Ashlon Davis in the first half.

The 33-year-old, who kicked three penalties and two conversions, was also among the try scorers for the visitors together with Hanru Sirgel while they also had a penalty try.

The Bulls led 7-3 at halftime as they look to win the Currie Cup for the third time in a row.

Though only a single try was scored in the first 40 minutes, the two teams still managed to deliver a captivating match.

Both sides showed great oomph and spirit in attack.  Their defence was also really pleasing.

After countless attempts, the deadlock was finally broken after 26 minutes of play, and it was skipper Gqoboka who led from the front to give the host a lead.

The try came from a well executed line-out by the Bulls in the Griquas 22 and they managed to crack the visitors’ stubborn defence.

The Griquas had fair chances of scoring their own try in the first stanza but lack of patience whenever they were in the opponents' half and approaching the try line saw them fail to cross the whitewash.

However, a George Whitehead penalty on the stroke of halftime helped the man from Kimberley reduce the deficit to just four points.

The Griquas received another penalty just two minutes into the second half and Whitehead made no mistake in his kick for the poles as he further reduced the deficit to just a point.

With the sides only separated by a single point, the Bulls were dealt a blow when tighthead prop Jacques van Rooyen was sin-binned on 48 minutes for a dangerous tackle.

Whitehead’s boot helped the Griquas to take the lead for the first time in the clash before the match was temporarily suspended as the lights went off at Loftus Stadium.

The Griquas were able to use the numerical advantage to their favour as soon as the lights came back on. Sirgel scored their first try of the night and Whitehead added the extras as the visitors took the score to 16-7.

After excelling with the boot, Whitehead also scored the second try for the Griquas and converted as his side got closer to the big victory.

The Griquas also had a penalty try

Youngster Van der Linde scored for the Bulls on 74 minutes, but their hopes of a comeback were quickly wiped out by the Griquas penalty try a minute later which saw replacement Dyalan Smith being sin-binned.

Mostert also scored for the Bulls on 80 minutes but that was not enough to see his side through to the final as the Griquas won 30-19.