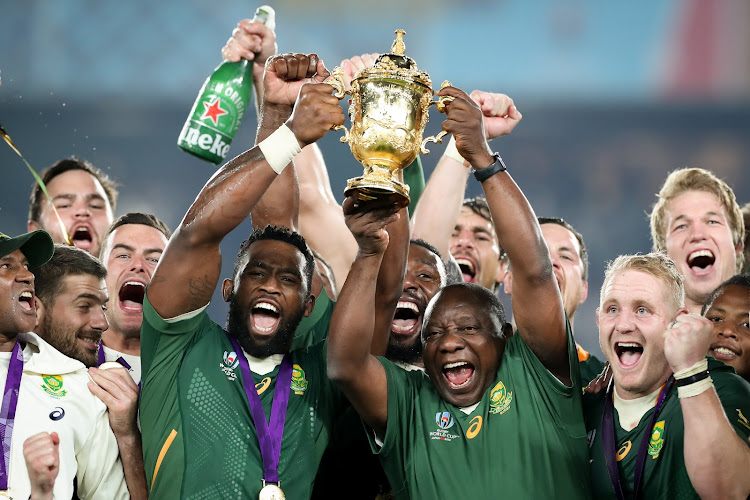 Rugby World Cup winners SA will play the All Blacks in the opening round of the Rugby Championship in Nelspruit on August 6. Here captain Siya Kolisi celebrates the World Cup win, while behind him the now retired Tendai Mtawarira as well as Jesse Kriel get in on the action.
Image: Springboks/Twitter

Player welfare concerns, and in all probability costs, were foremost considerations in Sanzaar's decision to partly scrap the home and away component in the Rugby Championship.

Sanzaar said the mini-tour with its reduced travel is locked in until the end of 2025.

“The tournament has proved to be an important stepping stone to Rugby World Cup success for southern hemisphere teams, but there is always room for improvement and innovation,” said Sanzaar CEO Brendan Morris.

The mini-tour “reinstates the touring traditions of rugby which previously have been an integral part of our game and will prove popular, we believe, with players, fans and broadcasters alike,” said Morris.

While it is true the in-out, quick turnabout nature of Rugby Championship Tests have left many cold, some of the game's more established followers may disagree that the new format restores touring to what it was. Tours are usually associated with a playing roster that includes Tests and midweek matches and extends well beyond two weeks.

The format that includes mini-tours for the next three years will also raise concerns over the competition's integrity as it no longer has an even spread of matches in the respective territories on an annual basis.

SA and New Zealand not playing each other on an equal basis in every tournament leaves the competition open to too many “what ifs” and “buts”.

Player welfare however, has become a weighty consideration when rugby bosses draw up playing rosters and are best not ignored.

On the same dates, Argentina will host Australia in Mendoza and San Juan.

On August 27 and September 3, New Zealand play Argentina in Christchurch and Hamilton, while Australia play SA in Adelaide and Sydney.