Woodridge hold on for narrow win over VP in tense finish 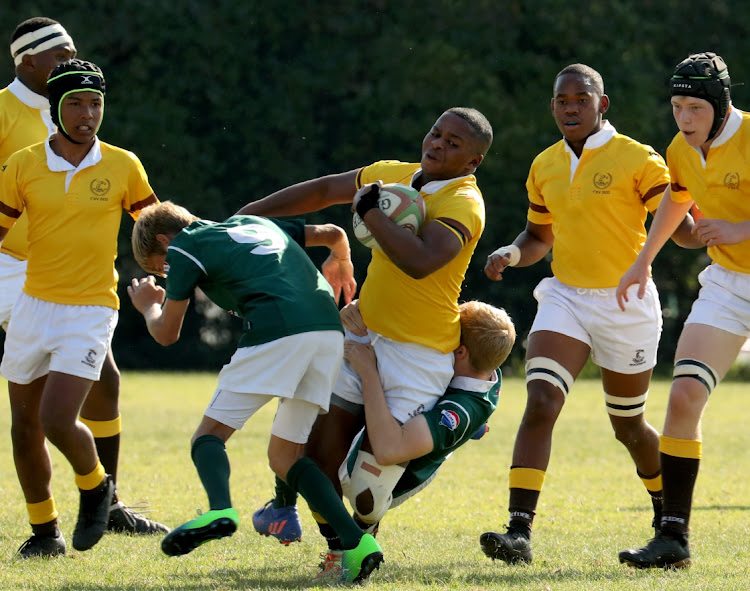 Woodridge held on for a 24-22 victory in an exciting finish to their schools rugby match against Victoria Park at VP on Saturday as a last-minute conversion failed to find its target for the home side.

Playing with a breeze at their backs, Woodridge dominated territorially in the first half and it was only some spirited defence and an ability to turn over the ball under pressure which saw VP keeping the visitors at bay.

Eventually, though, the Woodridge dominance told and from a scrum inside the VP half, Yibanathi Mjo picked up and broke right, passing the ball to scrumhalf Kyle Lottering who had a lot of work to do before crossing for first try of the match.

Woodridge continued to press hard, finding holes in the VP defence, but the home team scrambled well in defence.

However, the visitors went further ahead when fullback Bukho Pantsi broke through and offloaded to Lottering, who was tripped on the way to the try line, resulting in a penalty try to make it 12-0 at halftime.

In the second half VP exploited the conditions well and were soon back on level terms when they crossed for two tries, one of which was converted.

As the game ebbed and flowed, it was then Woodridge who regained the lead as they worked hard to close in on the VP try line. From a penalty five metres out, Pantsi took a quick tap and burst over for a try which Lottering converted to make it 19-12.

This set up a tense finish in the last 10 minutes. VP stayed in the game when their third try came from a cross-kick, but the conversion failed to leave them trailing by two points.

In a repeat of their earlier try, Woodridge scored again when a quick tap near the VP line saw Kyle Jordan take the final pass to cross untouched, giving them a 24-17 lead with just minutes remaining.

But VP were not done and kept the pressure on VP to cross for yet another try in the righthand corner, meaning a successful conversion would allow them to draw the game.

Unfortunately for them the brave attempt slid across the face of the posts, giving Woodridge a narrow victory.

VP's points came from tries by fullback Russel Pietersen (2) and locks Senze Ndabeni and Ikho Rafani, and a conversion by centre Reece Engelbrecht.

• On the netball court, the Woodridge first team have grown in confidence and they gave a textbook performance as they showed their ability to work as a team. This resulted in a 41-14 victory over VP.

Both circles stepped up their focus and commitment and the centre court linked the attack and defence by balancing the court.

The shooters’ statistics were  close to 100%, which is an excellent improvement, setting the bar high for their next match.

• The Woodridge first boys’ hockey team started slowly against VP but gradually gained momentum after scoring their first goal in the third chukka through a Tristan Torrance deflection.

They maintained their grip on the match to slot two more goals before the end, both being excellent strikes from captain Phillip Opperman, to win 3-0.

In the girls’ match Woodridge dominated the VP side to run out 6-1 winners.

Although they were lethargic at times, the visitors did enough to get the job done in the face of a brave performance from the VP goalkeeper.