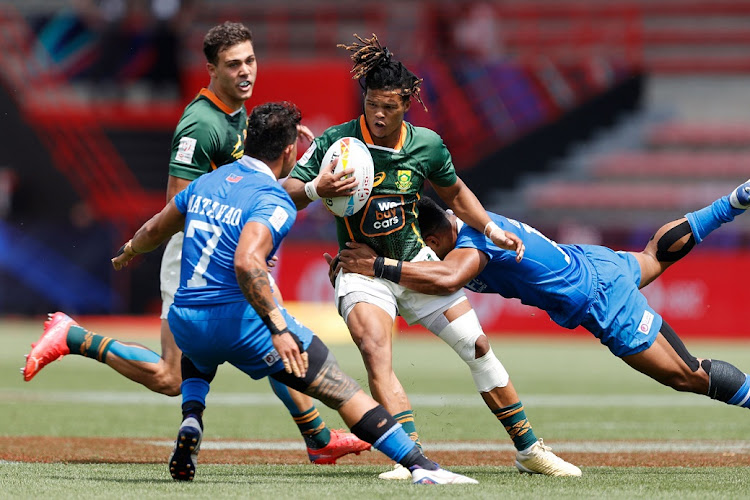 SA's Dewald Human in action against Samoa at the HSBC France Sevens at Stade Toulousain in Toulouse, France on May 21 2022.
Image: Mike Lee - KLC fotos for World Rugby/BackpagePix

The Springbok Sevens team suffered a third defeat at the HSBC France Sevens in Toulouse on Sunday in what Blitzbok coach Neil Powell described as “the worst performance at a tournament in my career”.

SA lost 24-21 to Scotland in the ninth-place semifinal, having lost to Ireland and Samoa in their pool on Friday and Saturday respectively. Their only victories were against Spain and Japan, and they had their worst finish since Powell took charge back in 2013.

“This is the worst performance by the team since I took over, and there is very little to be happy about in the performance we delivered here,” Powell said.

“We dropped the team as individuals and the team did not function as a unit. That is very disappointing.”

For Powell, who will be looking to find remedies in the next week as the team prepare for the London Sevens next weekend, the main problem identified is the inability of the players to execute their core duties. That created many mistakes and put the team under pressure.

“There were some good moments, but the mistakes are killing us,” he said.

“It is almost as if the players had forgotten what their roles and responsibilities are, and that put the system under pressure. Every player, and management, will have to look at themselves seriously and ask why they are not contributing as they were earlier in the season.

“It is a tough series, and a number of teams did not perform as expected. New Zealand also did not get out of their pool and Argentina and Australia both lost their Cup quarterfinals.

“It is almost as if the teams are becoming a bit jaded. That is making the World Series race very interesting.”

The Blitzboks (116 points) conceded their World Series lead to Argentina (118), who moved past them this weekend, but Powell remains positive SA can win the gold for the fourth time with him as coach.

Powell said they will announce possible reinforcements as soon as medical examinations are done.

“We will have to replace JC Pretorius as he broke his thumb and both Tiaan Pretorius and James Murphy suffered leg muscle injuries.

“Mfundo Ndhlovu was also not available to play yesterday, but we managed to get him on the field today. We have identified some replacements, but will make the final call later this evening.”

Ryan Oosthuizen was suspended for three matches and will miss the opening two pool matches in London.

Against Scotland, with Oosthuizen not available and Pretorius injured, the Blitzboks were left a forward short. When Tiaan Pretorius was stretchered off, Blitzbok captain Siviwe Soyizwapi was forced to move from wing to hooker.

The squad will depart for London on Monday and the replacements will join the team in England, Powell said.