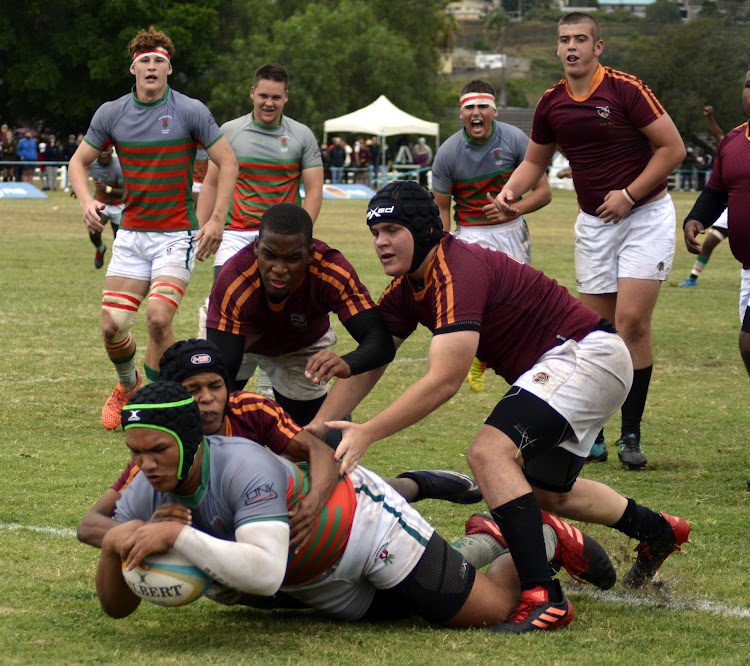 Wynberg showed good control and excellent decision-making to edge Grey High 18-16 in their schools rugby match on a wet Philip Field in Gqeberha on Saturday.

The Cape Town side trailed 11-5 at halftime, but were soon in the thick of things when they gained possession from the second-half kickoff to charge over for an important try.

Unfortunately their kicker was not on song, but Wynberg continued to press forward into Grey territory and produced a terrific drive from a maul to register their third try.

With the conversion hitting the upright, the Western Cape side were back in the lead, but Grey struck back when Byron Forward claimed possession from a kick ahead and charged downfield to be stopped just metres short of the line.

This time Grey, who had earlier wasted a similar opportunity, made no mistake and eventually Siviwe Bwowe grabbed the ball to force his way over, making it 16-15 to the home side.

However, a Wynberg penalty put them back in front and, in difficult conditions, Grey were unable to find their rhythm on attack and it was the visitors who were the happier team at the final whistle.

In the first half, Grey’s try came from a brilliant cross-kick which Luvuyo Nkomphela latched onto to score their opening try.

Having trailed 6-0 at the break, Kingswood responded with 34 unanswered points to end Hudson Park’s eight-year unbeaten run against coeducational schools on their home field.

Second half tries by Shingi Manyarara (8), Ben Hough (14), Lethu Gwarube and Siya Davids (11) proved to be too much for the home team, with flyhalf Gwarube adding two penalties.

In Kariega, Brandwag came out on top 22-13 against Daniel Pienaar in a nail-biting showdown.

The derby between these two sides was the much anticipated FNB Classic Clash which was played for the first time since 2019.

After victories against Queen’s and St Andrew’s, the Brandwag supporters had reason to be optimistic, but Daniel Pienaar enjoyed home-field advantage.

The first half produced some good running rugby, but it took 19 minutes before Daniel Pienaar opened the scoring with a try by eighthman Ethan Olckers.

Brandwag replied with a try by scrumhalf Raydon Swartbooi and took the lead just before halftime when prop Jason Oosthuizen powered his way across the line.

The halftime score was 12-7 to Brandwag.

In the second half, Daniel Pienaar came close to the line a few times, but the visitors defended relentlessly.

Brandwag scrummed well, but were on the wrong end of several penalties awarded in breakdowns.

However, Daniel Pienaar failed to gain much from these penalties because Brandwag lock Duncan Blignaut wreaked havoc in their line-outs.

Eventually Daniel Pienaar could add only two penalties to their halftime score, while Brandwag added a try to a penalty, both by fullback Jamiane Dampies.

Pearson travelled to a wet Humansdorp for their annual clash with Nico Malan, eventually coming out on top 11-7 in a hard and unforgiving contest.

After the home side opened the scoring with a converted try, Pearson struck back through a penalty by flyhalf Divan Fourie and a try from scrumhalf Casper Fouche to lead 8-7 at the break.

The second half was physical, with both sides putting in good performances, but battling to put points on the board.

Eventually, Pearson added one more penalty to make sure of a hard-earned victory.

The game between hosts St Andrew’s and Graeme in Makhanda was also played in difficult conditions, with Graeme doing enough to hold on for a tight 11-5 win.

The visitors drew first blood with a penalty, but St Andrew’s went ahead when Graeme could not stop their maul from a five-metre line-out.

However, a smart kick ahead saw Graeme outpace the St Andrew’s defence to score the only try of the match, taking an 8-5 lead into halftime.

The match continued to be a ding-dong affair in the second half, with neither side gaining complete supremacy, but a further penalty by Graeme saw them register a notable victory against one of their oldest rivals.