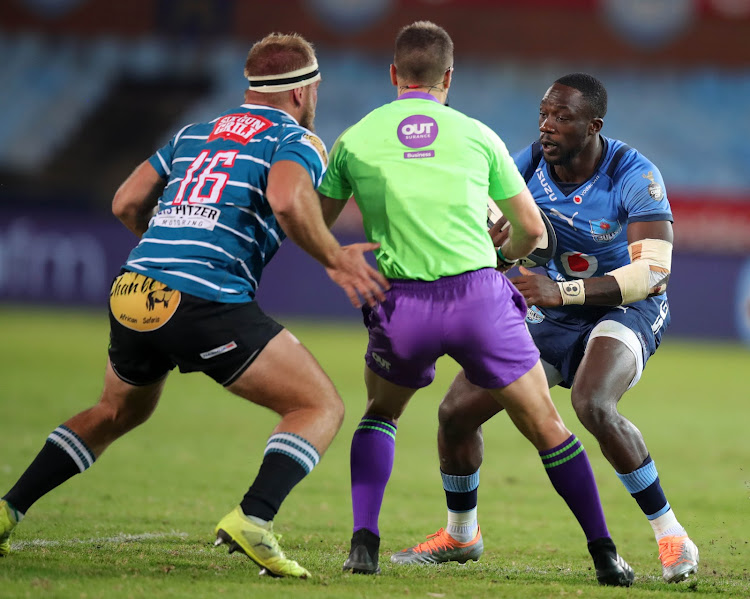 Madosh Tambwe of the Bulls is challenged by Janco Uys of the Griquas during their Carling Currie Cup match at Loftus Versfeld Stadium in Pretoria on Saturday.
Image: Samuel Shivambu/BackpagePix

The Bulls went from stampede to fillet mignon in their Currie Cup clash against Griquas at Loftus on Saturday.

With several of their United Rugby Championship (URC) campaigners on hand they had too much power and organisation in the first half only to wobble in the second as the visitors counter punched with telling effect.

They won 48-38 in a game that saw their fortunes fluctuate. Leading 36-5 at the break the Bulls looked to be in the pound seats. Flank Cyle Brink is increasingly stamping his authority on the Bulls pack and he was aided and abetted by Arno Botha, Lizo Gqoboka, Jan-Hendrik Wessels and Co.

They bossed the collisions and swept the visitors off the park, while behind a pack firmly in the ascendancy Embrose Papier delivered a chest out, front foot performance. He dragged a few fellow backs with him.

Much of which Madosh Tambwe did was done with purpose and vigour. He provided cutting edge in attack, while his defence continues to add bite to bark.

Though a Wessels try stretched the Bulls lead after the break they did not show the same urgency as they did in the first half.

The visitors seized the moment. Griquas centre Sango Xamlashe's drive for the line after he appeared to hit a roadblock proved inspirational. His teammates appeared energised by that moment. Wing Munier Hartzenberg started to lengthen his stride, while flank Hanru Sirgel found space and made telling metres.

The Griquas also benefited from a penalty try that brought them to within 10 points of the hosts but that's where their rally ran out of steam.