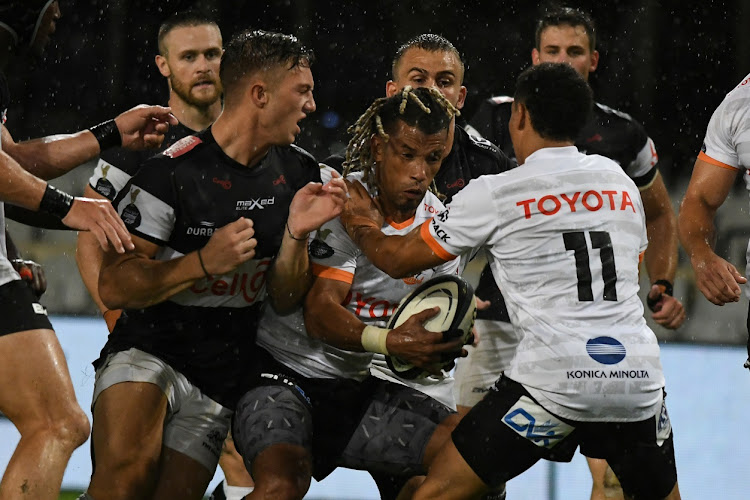 Clayton Blommetjies of the Cheetahs during the Currie Cup match against the Sharks at Kings Park in Durban on March 23 2022.
Image: Darren Stewart/Gallo Images

The Cheetahs’ unbeaten Currie Cup run continued when the Free Staters handed the Sharks a 29-15 defeat at a wet Kings Park in Durban on Wednesday night.

The match produced five tries, with Andisa Ntsila, Louis van der Westhuizen and Gideon van der Merwe on the scoresheet for the winners, who led 16-10 at half time, while Fez Mbatha and Dan Jooste scored for the hosts.

For most of the first half the Cheetahs looked set to continue their impressive Currie Cup run as they dominated the Sharks in their own backyard. The men from Bloemfontein led 9-0 after 20 minutes thanks to the excellent kicking of their veteran stars Frans Steyn and man-of-the-match Ruan Pienaar.

While Pienaar missed his first kick of the game after five minutes of play, the experienced scrumhalf redeemed himself when he scored a penalty four minutes later to give the visitors an early lead.

Steyn scored two more penalties to give the Cheetahs a 9-0 lead inside the first 20 minutes of the clash.

The away side increased the scoreboard pressure when flanker Ntsila scored the first try on 23 minutes and Pienaar added the extras as the Cheetahs took their lead to 16-0.

The Sharks registered their first points on the board through Tito Bonilla’s penalty with only six minutes to the halftime break.

That moment seemed to have revitalised the Sharks as they fought hard and took the game to the visitors. The home team was rewarded when hooker Fez Mbatha scored the first try for the Durbanites on 39 minutes.

Bonilla’s conversion reduced the Cheetahs' lead to just six points as the away team led 16-10 at the break.

The Sharks began the second half strongly compared to the opening stanza as they forced the Cheetahs to commit at least four penalties in a row in less than eight minutes. The Durban-based franchise kept on piling the pressure, which resulted in Cheetahs front-row replacement Conraad van Vuuren being sin-binned on 49 minutes.

The Sharks quickly responded to numerical advantage with a Jooste try but Bonilla missed his kick for extras and denied the Durbanites a lead for the first time in the clash as the score was 16-15 to the Cheetahs.

However, the men from Free State extended their lead when Pienaar scored his second penalty of the night on 54 minutes to make it 19-15.

The Sharks have now lost two matches in a row as they were coming off a defeat to the Bulls in their previous Currie Cup match.

The Cheetahs' quest for Currie Cup glory for the first time since 2019 looks to be well on course.