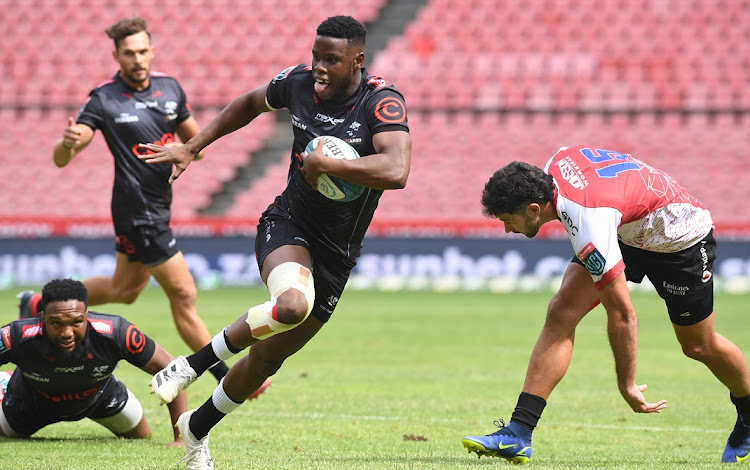 Aphelele Fassi of the Sharks cuts the Lions defence and scores a try in the United Rugby Championship match at Ellis Park on January 22 2022.
Image: Sydney Seshibedi/Gallo Images

The Lions' United Rugby Championship (URC) homecoming ended in defeat at the hands of the rampant Sharks at Ellis Park on Saturday.

In SA's long-awaited return to the URC after match postponements threw the playing roster into disarray, the Lions and the Sharks served up a try festival in front of a small but vocal crowd.

In a free-flowing match in which both sides placed the accent on attack, it was the visitors who showed just enough composure against opponents who contested gamely throughout.

The Sharks, who led 27-18 at the break, were made to sweat in the closing minutes as the Lions rallied to come within three points after a try for replacement scrumhalf Morne van den Berg.

The match was also marked by debatable decisions from the officials and so it proved with the last score of the game when Lukhanyo Am was adjudged to have scored.

The Sharks however were the marginally better side on the day.

The visitors didn't just have the firepower with personnel that could exploit space in the wide open spaces but at close quarters they also carried potency.

It was a see-saw opening quarter in which momentum never lingered. Both teams played joyously into space with little of the static ruck-based smash-fests derbies often degenerate into.

The Lions impressed with their offloading game, making and holding onto passes that had the Sharks' defence stretched. Inside the first 25 minutes they were over the try line on three occasions, but the last attempt was chalked off on account of touch-bound Edwill van der Merwe's bouncing pass to Francke Horne, ruled to have gone forward.

Still, the Lions were asking uncomfortable questions of the Sharks' defence. Scrumhalf Andre Warner sprinted clear after he was put into space after a Sharks knock-on.

Wandisile Simelane then showed why Kaizer Chiefs expressed an interest in his services when he was a boy as he deftly toed the ball ahead before falling on it in the Sharks' goal area. He was perhaps fortunate not be adjudged offside.

Similarly, the Lions scrambled when the Sharks came calling. The visitors are particularly adept at playing into space and in Am, Makazole Mapimpi and Aphelele Fassi they have slick, assertive operators when opportunity beckons.

It was Am who offloaded dexterously to Fassi to run in the Sharks' first try and it was his grubber that found Mapimpi for the first of the Bok winger's two first-half tries.

As the first half wore on, the Sharks showed they possessed more attacking options. Hooker Kerron van Vuuren scored what has now become an obligatory try off the back of a maul.

It was the Lions, however, who started the second half with greater resolve. They fashioned line breaks, often by going the direct route and when they eventually made it over the try line it was as a result of the forwards bashing what was in front of them.

For all their good work to get themselves back within five points, the Lions were left to rue some soft moments to hand the initiative back to the Sharks.