Blitzboks down USA to win in Dubai 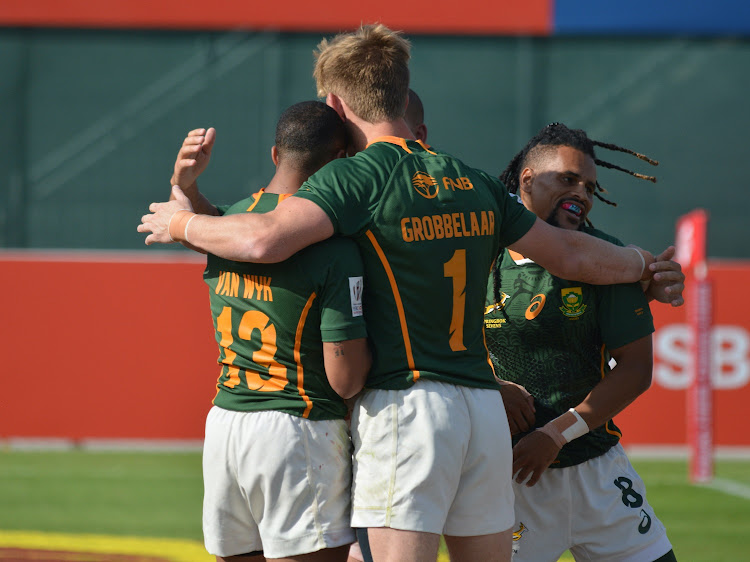 The Blitzboks surged to their fifth title of the season when they downed the US 42-7 in the final of the Dubai leg of the World Sevens Series on Saturday.

They swung the match decisively in their favour in the first half leading 21-0 at the break and they repeated that scoring sequence in the second.

Ronald Brown played a starring role with his darting runs but Selwyn Davids and JC Pretorius, though applying different methods, also terrorised the US defence. Typically Davids teased as he jinked this way and that, while Pretorius went the direct route dragging those defenders who managed to hang on with him.

Even going backwards Brown managed to flummox the US defence. He fumbled the ball backwards before regathering and beating the hesitant defence for the Blitzboks' first try.

Captain Siviwe Soyizwapi also got on the score sheet when he scored his eighth try of the tournament, before Brown dotted down for his second just before the break.

That pretty much broke the resolve of the opposition.

Pretorius scored the try that handed SA an unassailable lead in the semifinals when they beat Argentina. Earlier the Blitzboks beat Australia in the quarter having emerged from their pool with wins over Ireland, Great Britain and Japan.

The US reached their first final since Paris in 2019 with a shock 21-19 over Olympic champions Fiji.

The US made a spirited comeback scoring two second-half tries against a Fiji who featured only two players who won gold in Tokyo.

Australia recorded a 22-7 win over Fiji in the women's final.

The Dubai event brought together 12 men's and 10 women's teams but did not feature New Zealand due to Covid-19 restrictions.

The next tournament will be in Malaga on January 21 to 23.