Local governing body will no longer appeal the ban and fine 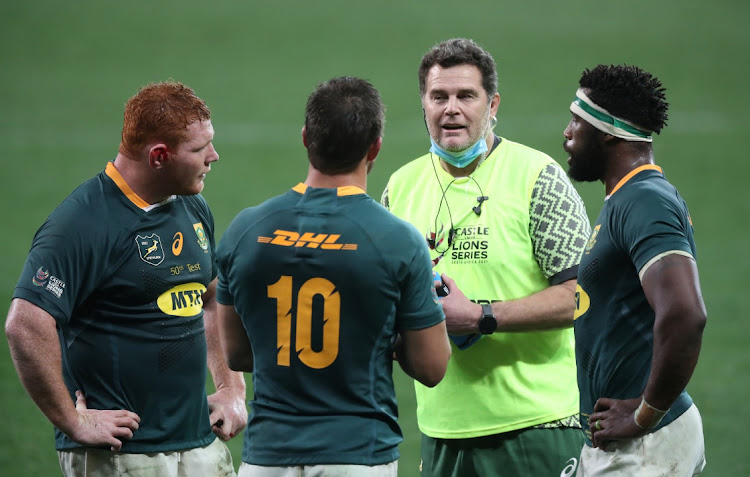 SA Rugby's director of rugby Rassie Erasmus speaks to Springboks, Steven Kitshoff, Handré Pollard and Siya Kolisi during the second Test against the British & Irish Lions at Cape Town Stadium in July. Erasmus has been banned from the team until the end of September 2022.
Image: MIKE HUTCHINGS/Reuters

In a dramatic late in the day about-turn, SA Rugby has withdrawn an appeal against sanctions imposed by World Rugby last week.

The sport's governing body banned SA Rugby director of rugby Rassie Erasmus for two months and from all rugby activity. He was also banned from coaching, contact with match officials and engagements with media until the end of next September.

The ban came as a result of Erasmus' now infamous hour-long video after the first Test against the British & Irish Lions in which he criticised match officials' decisions. Naturally, the video went viral.

SA Rugby received a £20,000 (about R400,000) fine for failing to ensure Erasmus complied with World Rugby's code of conduct.

In a statement issued at the close of business on Thursday, SA Rugby said: “SA Rugby and Rassie Erasmus wish to apologise to the match officials appointed to the first Test of the Springboks’ series against the British & Irish Lions.

“We also confirm that SA Rugby and Erasmus have advised World Rugby that they withdraw their notice of appeal and will not lodge an appeal against the sanctions imposed by the judicial committee.

“This has been a highly stressful and charged environment with unusual pressures placed on all concerned and we have no wish to prolong that experience for anyone.

“We have drawn a line under the incident and only wish to look forward. We will respect the outcome of the hearing, allowing our national teams and rugby operations to plan with clarity for the coming months.”

It means SA Rugby will have to cough up the fine and the Boks will be without Erasmus' services (directly anyway) for the bulk of the year.

He will have to watch from a distance as the Boks play Wales in three Tests, and go into battle in six Tests in the Rugby Championship.