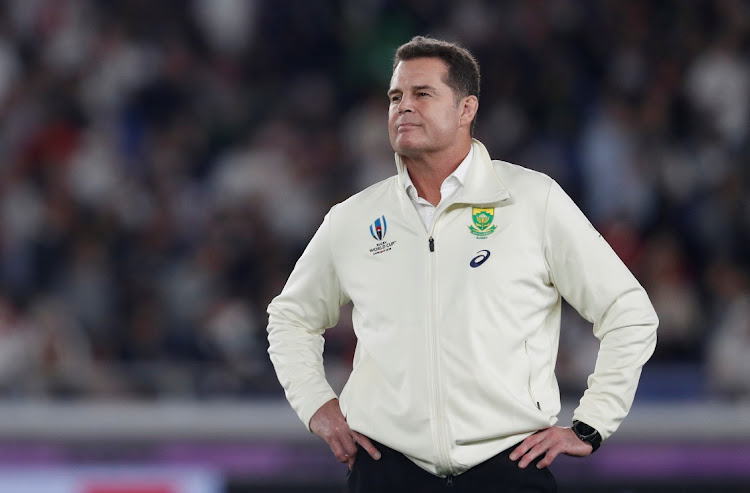 SA director of rugby Rassie Erasmus has been found guilty of misconduct by an independent committee for his hour-long video critique of the match officials during the British & Irish Lions series, but will appeal the verdict.

Erasmus, who coached the Springboks to the 2019 Rugby World Cup title, has been suspended from all match day activities for two months with immediate effect until Sept. 30, 2022, while SA Rugby have been fined 20,000 pounds ($26,976), World Rugby said on Wednesday.

Erasmus was found guilty of all six charges brought by the governing body for various breaches of World Rugby Regulation 18 (Misconduct and Code of Conduct), which could have carried a much tougher sentence.

He has indicated he will appeal the verdict, as will SA Rugby.

“SA Rugby and Rassie Erasmus have noted the decision of World Rugby’s judicial committee. Both parties confirmed they will exercise their rights to appeal the verdicts,” a joint statement on Wednesday said.

“Neither party will make any further comment until the process is complete.”

The Springboks play their final game of the autumn international series against England at Twickenham on Saturday.

Though Jacques Nienaber is now the head coach of the side, he has made no secret of the fact that Erasmus has a heavy input, from training to team selection.

Erasmus' two-month ban, if upheld, will have little material effect for the Boks as they are not expected to be in action after this weekend until July 2022, while his match-day suspension will not stop him from helping to prepare the team.

He was unhappy with numerous decisions by Australian referee Nic Berry in the 22-17 first Test loss to the Lions in Cape Town in July, and further displeased when his efforts to engage with the official the following day were rebuffed.

He made a 62-minute video that was a critique of the performance of the match officials, including what he termed the “disrespect” shown to Bok captain Siya Kolisi.

The video, Erasmus claims, was intended to be sent to World Rugby officials and Berry only.

Instead it found its way onto a public viewing platform and started to circulate on social media.

The misconduct committee found that Erasmus had told Berry he would make the video unless the latter agreed to a meeting, and made good on that threat.

He was also found guilty of making comments in the video that were “either abusive, insulting and/or offensive to match officials”.

Among other charges were the allegations that he had attacked, disparaged and/or denigrated the game and match officials, did not accept the decisions of match officials, created a scenario that may impair public confidence in match officials and brought the game into disrepute. — Reuters