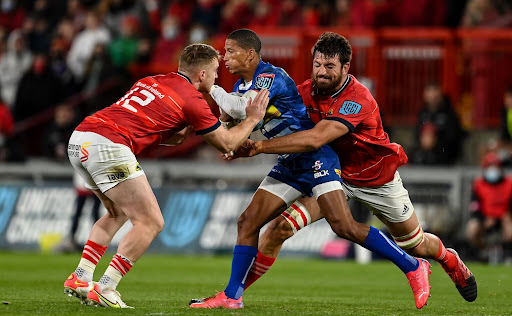 UNDER PRESSURE: Manie Libbok of the Stormers is tackled by Rory Scannell, left, and Jean Kleyn of Munster during their United Rugby Championship match at Thomond Park in Limerick, Ireland, last Saturday
Image: (Photo by Brendan Moran/Gallo Images)

Improved discipline and better execution have been hot topics in the Stormers dressing room this week before a crunch showdown against adventurous Scottish outfit Edinburgh on Saturday.

Successive defeats to Benetton and Munster and have left the Stormers on the back foot and questioning their tactics and temperament in the Europe-based United Rugby Championship.

The Stormers dominated the first half against Munster, but surrendered a 15-0 lead against their tenacious Irish opponents.

“We are disappointed we lost, but we are proud of the effort we put in,” Stormers coach John Dobson said.

“I spoke to Johann van Graan [Munster coach] afterwards and he said that if Manie Libbok’s try had been awarded they thought that was it.

“We were disappointed with our discipline in the second half, which gave them entries into our 22.

“That is something we talked about the whole week.

“We got on the wrong side of the referee no question in the second half and we paid the price for it.

“We really struggled with the interpretations in that second half.

“We are proud of the way those guys fought until the end.

“If Andre-Hugo Venter’s try had been awarded at the end, then it would have been a six-point game with four minutes to go.

“We were starting to open them up at the back-end of the second half again.

“We are going to have to try to learn as quickly as we can, because these teams don’t play fast rugby, they play direct keep-ball and once they get into your 22 it is very hard to stop.

“We are letting them in there through poor discipline and we need to work out why that is happening and put a stop to it.”

Stormers skills coach Labeeb Levy said his team would take positives away from the Munster defeat.

“We were a lot happier than the previous week obviously with our style of play, while we showed a bit of intent and a lot of commitment,” he said.

“There are things we are looking to improve on, like unnecessary penalties in various areas of the field, while there were some expensive moments we felt cost us and certain defensive aspects we want to work on that we need to improve.”

“We are expecting a wobble here and there, so we will train on a similar pitch to prepare the guys for the game.

“So we have put a lot of focus on analysing them and putting in defensive plans for their star players and general attack.”

Munster coach Van Graan praised his team’s resilience for fighting their way back into the game against the SA side.

“It definitely comes from continuity,” he said.

“We, as a coaching group, spoke about that after about 30 minutes.

“Everybody was pretty calm.

“It was 15-0 at that point and we always knew we could come back.

“That’s why we spoke about changing our plan a little bit at halftime, which worked pretty well.

“That gave us multiple entries. I’d much prefer 15-0 up rather than 15-0 down, but that is what makes rugby beautiful.

“You cannot script every game.

“It takes its own momentum and character.

“That is what helps when you play at home, the crowd got behind us, and that is what is special about Munster rugby.”