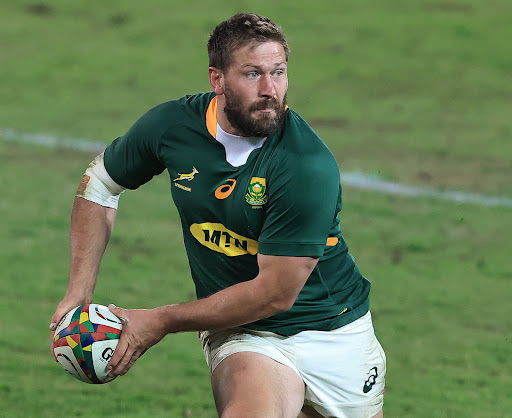 EMOTIONAL MOMENT: Frans Steyn felt he had let the Springboks down when he conceded a late penalty against the All Blacks
Image: DAVID ROGERS/GETTY IMAGES

During a frenetic ending, an emotional and half-tearful Frans Steyn felt he let his team down when he conceded a late penalty against the All Blacks, Springbok loose forward Duane Vermeulen said.

There were dramatic scenes during the final minutes as fortunes fluctuated before the Boks grabbed a dramatic 31-29 win thanks to a penalty from Elton Jantjies after the hooter.

Vermeulen said Steyn had been very emotional, but was ecstatic when Jantjies landed his match-winning penalty.

“I think Frans Steyn’s emotions were about his tackle on Damian McKenzie,” Vermeulen said.

“I think he (Steyn) thought he had tackled McKenzie and he (McKenzie) lost the ball and when he fell to the ground the referee said he (Steyn) had conceded a penalty.

“Then Frans was half-negative and almost tearful there.

“He felt as though he had dropped the team.

“So when we eventually got the penalty and we could win the game,  he was ecstatic and very happy that the guys would pull it through.

“It was a great relief for him.”

After their heroic victory over the All Blacks, the Springboks are looking forward to having two weeks off before they embark on a three-match tour of the UK, Vermeulen said.

Buoyed by a tense victory over New Zealand in their final match of the Rugby Championship, the Boks are  facing matches against Wales, Scotland and England during November in the Autumn Nations series.

“At the end we got it all together and we walked away with a win at the end of our tour,” Vermeulen said.

“So it’s good vibes and energy and hopefully we can take that positive energy going into our end-of-year tour.

“Luckily we have  two weeks off at home then we go on another six-week tour.

“It is difficult and with Covid it makes it more difficult.

“The team is in a good mental state at the moment and hopefully we can take that going into the end-of-year tour.”

Vermeulen said the team had endured hardships during their participation in the Rugby Championship.

“You have the public and the media who have their opinion on what we do on tour and the things we go through,” he said.

“But if you are not here, you don’t really understand what we are going through.

“People say it is your job and whatever, and we don’t listen to the public’s opinion, but it’s not as easy as people think.

“You are away from home, away from your families, you don’t see your kids.

“There are a lot of guys who have children and you don’t spend time with them and that is vital to your mental state and where you are as a person and as a player.

“It’s a difficult thing being away from home and we had our challenges with the team.

“Our first two weeks we were in hard lockdown, we couldn’t do anything.

“We had no support in the hotel.

“You had to do all the things on your own, make your bed, clean your room and it’s a whole different set-up.

“And then once you are out of quarantine it’s a whole different thing as well.

“You have got to keep on adjusting to what is thrown at us and sometimes it is difficult and we miss it a bit.