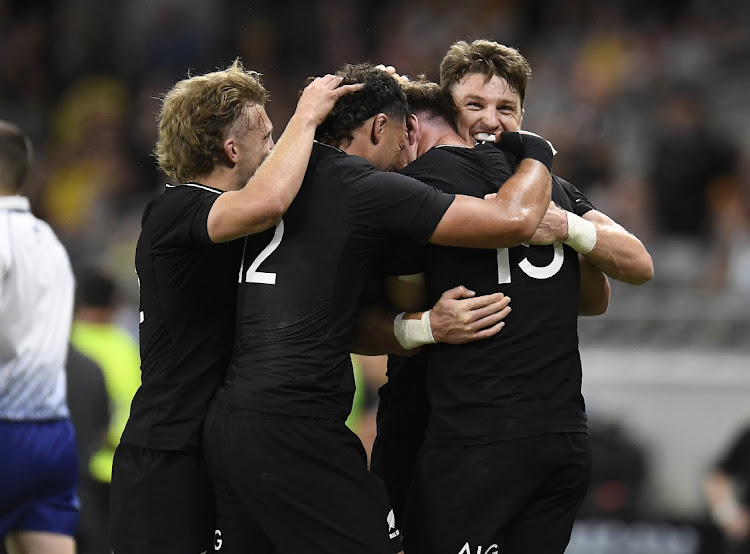 The All Blacks celebrate after winning the Rugby Championship match between the New Zealand All Blacks and the South African Springboks at QCB Stadium on September 25, 2021 in Townsville, Australia.
Image: Ian Hitchcock/Getty Images

New Zealand narrowly justified their number one world ranking with a hard-fought 19-17 win over world champions SA in Townsville on Saturday to secure the Rugby Championship title with a match to spare.

The 100th Test between rugby's two most successful nations did not disappoint and it was not until fullback Jordie Barrett kicked his fourth penalty two minutes from time that the All Blacks took the lead for the final time.

All Blacks winger Will Jordan and his Springboks counterpart S'bu Nkosi scored early tries but from then on it was a kicking duel between SA flyhalf Handré Pollard and Barrett to decide the spoils.

Ultimately, Barrett's 14 points from the tee were enough to give New Zealand a 12th southern hemisphere Test championship title and a 10th successive Test win.

“We knew this game was going to come down to the wire, it was tit-for-tat out there,” said New Zealand forward Ardie Savea. “They put us under a lot of pressure. Just relieved really.”

After disappointing in back-to-back losses to Australia over the last two of weeks, the Springboks were back to their clinical best at North Queensland Stadium.

Scrumhalf Faf de Klerk sent box kick after box kick into the Townsville sky and his forwards muscled up in the tight and at the set piece.

The All Blacks scored first in the third minute when hooker Codie Taylor latched onto a loose ball and found room to burst up the middle before finding Jordan in support with a clear sprint to the line.

The Springboks hit back almost immediately with All Blacks winger George Bridge losing a de Klerk bomb in the evening sky and Nkosi pouncing to touch down.

Two Handré Pollard penalties gave SA an 11-7 lead after 13 minutes but Jordie Barrett put the All Blacks back in front with two of his own, the second after Nkosi had been sent to the sin bin for a deliberate knock down.

New Zealand held the 13-11 halftime lead until Pollard's third penalty just before the hour mark but Barrett was quickly able to restore the slender advantage.

Another penalty after the collapse of a rolling maul allowed Pollard to put SA 17-16 in front in the 67th minute — a sixth change of lead — but Barrett was unerring when his chance came to seal the win.

“It was tough, it was an awesome contest and it was a fair contest,” said Springbok captain Siya Kolisi.

“It's been a tough two weeks but I'm proud of the way the boys stood up today.”