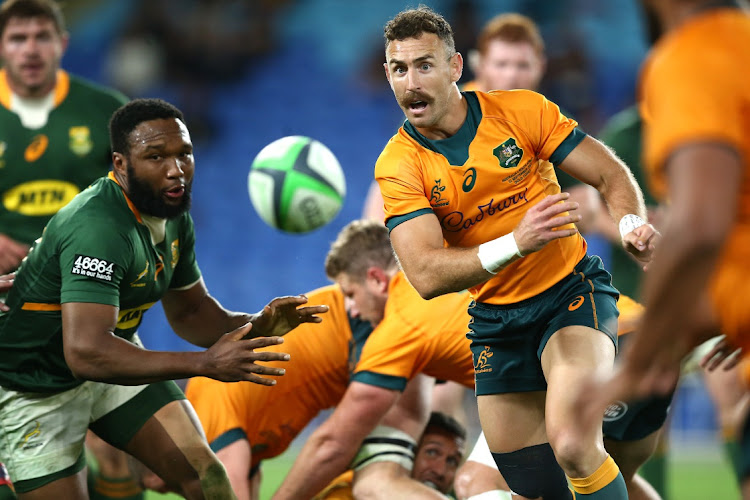 Nic White of the Wallabies passes the ball during the Rugby Championship match against the Springboks at Cbus Super Stadium in Gold Coast on September 12, 2021.
Image: Jono Searle/Getty Images

Australia coach Dave Rennie largely kept faith with the Wallabies side that beat South Africa last week when he made three changes for this weekend's Rugby Championship rematch with the world champions in Brisbane.

Nic White moves up from the bench to replace Tate McDermott at scrumhalf in a halfback partnership with Quade Cooper, who kicked a clutch penalty to secure last week's 28-26 win on the Gold Coast in his first Test for four years.

The other changes for the Lang Park Test were in the front row where Taniela Tupou gets his first start of the campaign at tighthead prop in place of Allan Alaalatoa, who has returned home for the birth of his child.

James Slipper returns on the other side of the front row in place of Angus Bell, who was named on the bench as one of two replacement props alongside recalled tighthead Tom Robertson, who is set to play his first Test since 2018.

Lock Darcy Swain, who missed last week's Test after suffering an injury in the last of three losses to the All Blacks, was also named on the bench in place of Rob Leota.

"It's an incredible milestone for Hoops on Saturday evening in Brisbane and it's a testament to him as a person and a player," Rennie said in a statement.

"I've been so impressed with his leadership both on and off the field and his drive to be better every day."

South Africa coach Jacques Nienaber named his side on Wednesday, making one enforced and one tactical change to the side which lost last week.