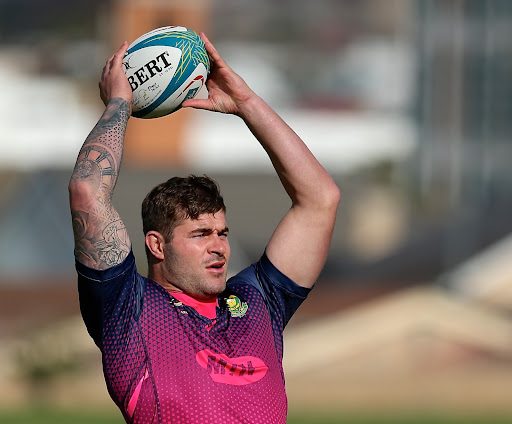 NO REST: Springbok hooker Malcolm Marx says his team are working hard to improve ahead of their second clash against the Wallabies at the Suncorp Stadium in Brisbane on Saturday.
Image: GALLO IMAGES/GETTY IMAGES/RICHARD HUGGARD

Hard work will be put in on the training pitch as the Springboks intensify their bid to obtain scrum dominance over the Wallabies on Saturday, hooker Malcolm Marx says.

After being pipped 28-26 after a last-gasp penalty by Wallabies flyhalf Quade Cooper, the Boks face a rematch against Australia at the Suncorp Stadium in Brisbane (kickoff 9.05am SA time).

The world champions had been favoured to extend their unbeaten run to three matches before coming off second best against a feisty Wallabies outfit in round three of the Rugby Championship.

“There were obviously scrums where we thought we were dominant and maybe there was a different picture that was painted towards the referee [Luke Pearce] and maybe that is not what he saw,” Marx said.

“I am always going to sit here as a Springbok and say our forwards were dominant.

“Maybe the pictures we felt and that he saw were two different things.

“We will have a look and work on things and see where we can improve.

“The guys will work hard for Saturday’s second game against Australia.

“There is always work to be done.

“No matter how well we perform or if we win or lose there is always room for improvement and things we want to do better.

“We strive to get better every week regardless of what the result is.

“So there will be work-ons and things we will focus on this week in preparation for the second game against the Wallabies.”

Asked how he thought referee Pearce handled the game, Marx said: “Obviously there are things that will go your way and things that won’t in a game.

“There are pictures we see that maybe the ref views differently.

“I cannot comment on what he saw because maybe he saw something different to what we saw.

“It is a tough question to answer.

“We can’t allow everything on the referee.

“He is the manager of the game at the end of the day and whatever he calls it is on him and it is his decision.

“It is hard to say at the moment what lessons we learnt in the defeat.

“As our coach Jacques Nienaber has said, we will have to look at the game in detail and look and see where we made mistakes and where we can improve.

“There is always room for improvement, no matter how well you play and there is also room to grow.”

Following their defeat, the Boks are second on the log with 10 points, five behind New Zealand on 15, at the competition’s halfway stage.

“The Wallabies took every opportunity they were given, so well done to them,” Bok skipper Siya Kolisi said.

“They always pitch up when we play them, and it’s always difficult to play them here.

“Getting yellow cards is something that we rarely do, so to get two in one day is disappointing.

“We know what we need to fix.

“We’ll watch the game back again, and we have a short week, and we’ll go again in the Brisbane Test.

“It was just not our day today. It’s as simple as that, and I don’t think there is anything deeper than that.”