No need for Boks to press panic button, says Nkosi

Loss boils down to ‘execution, not game plan’ 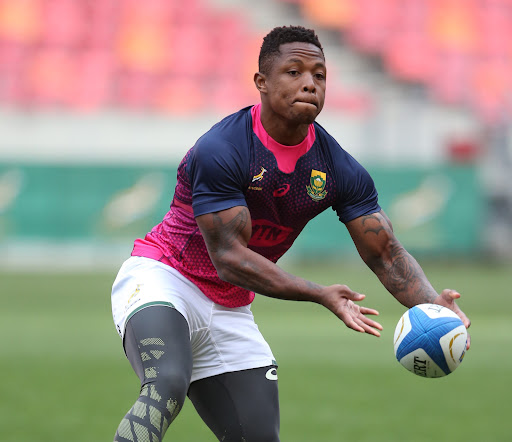 BATTLE READY: Springbok wing Sbu Nkosi says there is no need for the team to go back to the drawing board after their loss against Australia
Image: GALLO IMAGES/RICHARD HUGGARD

There is no need for the Springboks to press the panic button and rush back to the drawing board after their last-gasp defeat against Australia, flying wing Sbu Nkosi says.

After starting the defence of their Rugby Championship title with two wins against Argentina in Ggeberha, the Boks had the wind knocked out of their sails in round three of the competition on Sunday.

Wallabies flyhalf Quade Cooper slotted a penalty after the hooter to earn his team a narrow  28-26 win at the Cbus Super Stadium on Australia’s Gold Coast.

There is not much time for the Boks to regroup because they face the Wallabies again at Suncorp Stadium in Brisbane in round four of the competition on Saturday (kickoff 9.05am SA time).

“I think we can boil our loss to Australia down to execution,” Nkosi said.

“I don’t think we have to go back to the drawing board and change anything.

“We have a solid plan that has turned us into world champions.

“We are still going to grow that extra leg that gives us that ruthlessness to put teams away.

“I don’t there is a whole lot of thinking to do.

“I think we need to be better at executing our game plan.

“As we have seen in the past it has got us a lot of success, we just need to to get to that again.”

Asked if the Boks needed to be more flexible in their approach, Nkosi said: “It is hard to say whether our Plan A did not work.

“We scored three more tries than Australia and that is excellent.

“Like it has been stated, our discipline cost us the game because they managed to score 23 points off the kicking tee.

“So I would not say we needed a Plan B on attack.

“Our attack worked very well and a maul is an attacking set piece and we scored three tries off it and well done to the forwards on that one.

“As a back, my responsibility is to get the forwards into those positions where they assert their dominance on the opposition.

“That is my feeling on everything.”

Nkosi said he was unsure why the Boks were unable to dominate the aerial battles against the Wallabies.

“A lot of things did not feel right,” he said.

“But I think it’s better to speak after a good detailed review of what went on.

“If we look at the detail much closer it will give a more accurate answer.

“I have to admit we did not enjoy the air like we usually do and we will have to go back to the clips and see what went wrong and where.

“So I can’t give an answer now because I was in the mix of things and felt that I struggled to get into the air.

“I don’t know if there were tactics used that were illegal or whatever.

“I must have a detailed review before I can give a straight answer.”

In his comeback match, Cooper chalked up 23 points, slotting seven penalties and a conversion, with Andrew Kellaway scoring the lone try for the Wallabies in the 17th minute.

The Springboks scored three tries from line-out drives, with Malcolm Marx grabbing two and Bongi Mbonambi the other.