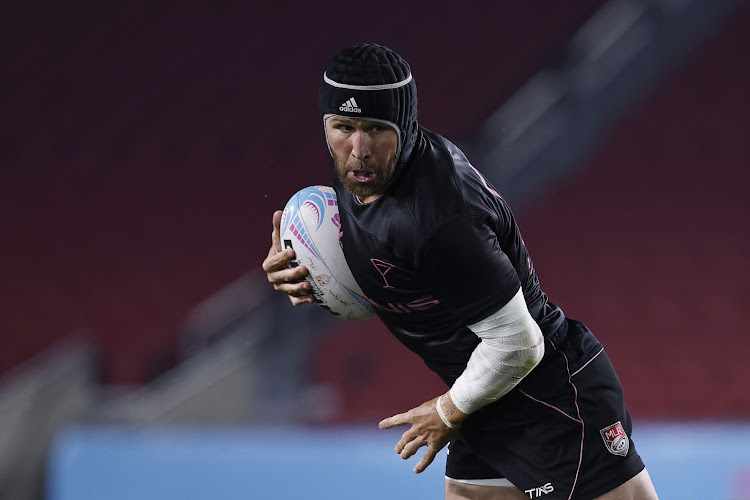 Matt Giteau of the LA Giltinis runs with the ball against NOLA Gold at Los Angeles Coliseum on July 4, 2021 in Los Angeles, California
Image: Michael Owens/Getty Images for LA Giltinis

Former Wallabies centre Matt Giteau has backed Rugby Australia's (RA) call to abandon the eligibility rule for overseas players, which is named after him, saying the country needs to pick its best team in the wake of another All Blacks thrashing.

RA boss Andy Marinos said over the weekend that the rule, which excludes foreign-based players from Wallabies selection if they have less than 60 Test caps, might be scrapped before the end of the season.

The rule was dubbed the 'Giteau Law' after former Australia coach Michael Cheika persuaded RA to ease a blanket ban on overseas-based players so he could select Giteau and winger Drew Mitchell for the 2015 World Cup in England.

However, Giteau added his voice to calls to do away with the rule entirely in the wake of Saturday's record 57-22 defeat by the All Blacks at Eden Park.

"For me, it was unreal that they brought in a rule which allowed myself and Drew (Mitchell) to be available for a World Cup and for me to get to 100 tests," he told the Sydney Morning Herald.

"For that, I’m forever grateful ... But moving forward, I think the Wallabies need to do whatever they can to be as competitive as they can.

"At the highest level, like the Wallabies, ultimately, it’s about winning. Pick your best team and be as strong as you can. I’m all for any choice the people higher up make if it’s going to benefit the Wallabies and Australian rugby."

RA installed its selection curbs as a means to retain talent in domestic rugby but the Giteau Law has failed to prevent a host of top Australian players heading overseas to take up more lucrative contracts.

RA watered down the Giteau Law for Australia coach Dave Rennie when he took over last year, allowing him to pick any two overseas-based players he wanted.

Once ranked second in the world after the All Blacks, the Wallabies have slumped to seventh since reaching the final of the 2015 World Cup.

Their back-to-back defeats at Eden Park over the past two weeks ensured New Zealand retained the Bledisloe Cup, the annual trophy contested by the trans-Tasman nations, for a 19th successive year.

"Need a full deck to work out our best hand. Build base and roof simultaneously," the ACT Brumbies forwards coach tweeted.