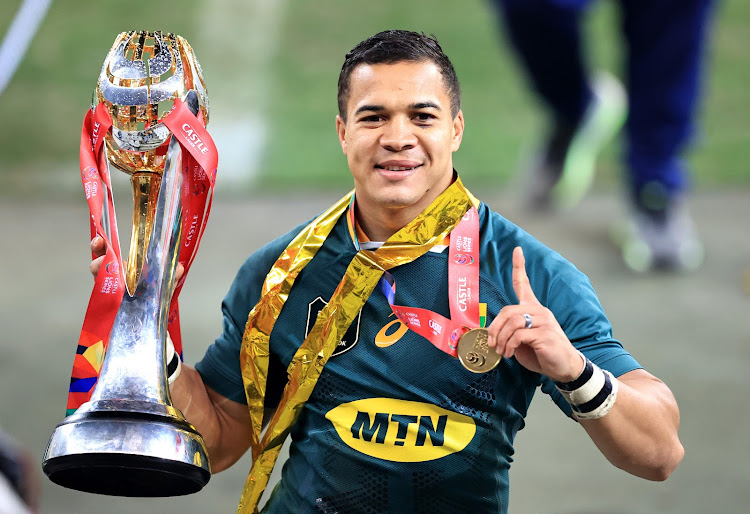 The Springboks just completed a come-from-behind 2-1 series win over the British & Irish Lions‚  and here are six of their most outstanding performers that helped make it possible.

SIX OF THE BEST

With energy and drive that is hard to match‚ Mostert spread his range of influence across the park in the series.

His versatility made him invaluable to the Bok cause. That Mostert is the ultimate team player cannot be in doubt.

He was one of the starting locks when the Boks launched their Rugby World Cup campaign against the All Blacks in 2019‚ but Lood de Jager eventually played his way into the No.5 jersey at Mostert's expense.

Mostert did not sulk and became an influential member of the Bomb Squad and he continues to leave an indelible mark.

The burly tight head‚ sometimes loose head‚ got heat for a perceived lack of form going into the series.

When he was selected in the starting team for the first Test his credentials invited even closer scrutiny‚ but Nyakane splendidly rose to the challenge.

His performance in the first half of the first Test put the Boks in the ascendancy‚ but they could not sustain their effort.

Nyakane‚ this time off the bench‚ was equally impactful in the deciding Test‚ winning crucial scrum penalties to get the Boks back into the game.

The World Cup-winning dynamo was at it again.

If there is a player in world rugby capable of producing a rabbit from a seemingly empty hat‚ it is Kolbe.

With the Springboks desperate to wipe out a first half deficit in the decider‚ Kolbe again tiptoed past defenders to score a crucial try for the Boks.

He may not be as prolific as Makazole Mapimpi‚ but Kolbe is a man for the big stage.

Scoring a match-winning try against the All Blacks‚ one that sealed the Rugby Championship‚ set the Boks on their merry way in the World Cup final and one that proved decisive in a Lions' series.

There was much angst when De Allende got injured in the now infamous fire pit accident with his Munster teammates.

His injuries weren't as bad as that of RG Snyman and he recovered in time to take up his position in SA A's game against the Lions.

He proved his battle readiness then and was duly restored to the Bok midfield next to Lukhanyo Am.

The pair operate like auxiliary loose forwards‚ providing grunt and muscle in hard to reach areas.

But they also possess the deftness of touch their position requires.

The Sharks captain is one of rugby's foremost under-the-radar overachievers.

His exemplary work rate allows him to make incursions and interventions that are beyond the scope of the ordinary player.

He takes everything in his stride and personifies calmness in an area where the traffic is fast and furious.

To single out one area of excellence in Am's makeup is an exercise in futility as he performs most disciplines with off-the-radar competence.

The Bok captain doesn't always get the plaudits‚ but the Lions series underlined his value to the team.

When the Lions arrived here‚ they had backrowers to burn and questions were raised about SA's ability to match them‚ especially in the absence of Duane Vermeulen‚ and later Pieter-Steph du Toit.

Kolisi‚ however‚ did not shirk his responsibilities and kept meeting the challenges the Lions presented.

He was particularly heavy-handed with the way he dealt with the tourists in the tackle.

They kept coming but the Bok captain stood his ground.

With a World Cup winner's medal and a Lions' series win under his belt‚ Kolisi's place is secure among Springbok rugby great leaders.