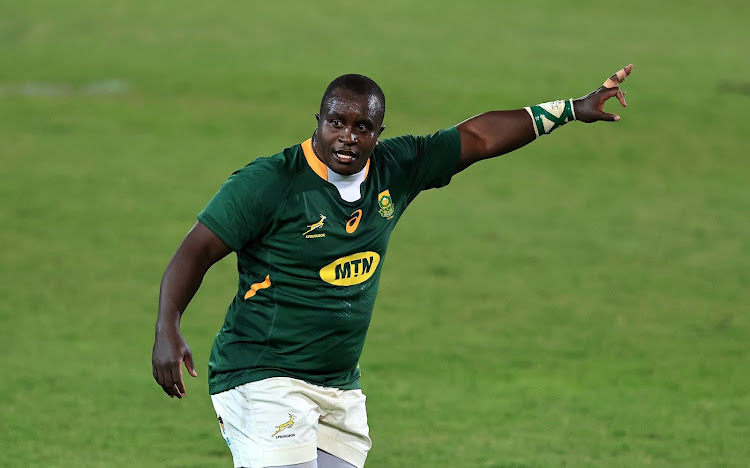 WHATEVER IT TAKES: Springbok prop Trevor Nyakane says he went into the second Test against the Lions with confidence because of good preparation
Image: DAVID ROGERS/GETTY IMAGES

With a series win within reach the Springbok pack will bring searing heat to the battle when they scrum down against the British and Irish Lions on Saturday, prop Trevor Nyakane says.

Nyakane was hailed as one of the heroes when the Boks secured a 27-9 victory in the second Test at Cape Town Stadium.

The fiery front row forward says he is willing to play any position in the pack as the Boks look to clinch a series win.

“The credit always goes to the back five because they have been immense,” Nyakane said.

“They just give their all every time we go into a scrum.

“Whether it is in a training session or a game, they have so much firepower that the props just have to concentrate on a few things to get right.

“We know they will bring the heat from behind.

“I did start the first Test on tight head, but, as everyone knows, we had a bit of a niggle here and there, and I was asked to go to loose head.

“When you pull on that Springbok rugby jersey, whatever number it is, if you are in the front row you know that there is a job that you need to do.

“You also know the whole pack will back you and I think that was the success of the team.”

Nyakane said changing places in the front row was not as simple as it might appear to some observers.

“From a technical perspective there are a lot of things that happen,” he said.

“I know most people think that a prop is just a prop.

“It was a bit challenging for me to move back to loose head.

“I have had a lot of help from Ox Nche and Steven Kitshoff,  who have been playing loose head for the past three years.

“That is a nice thing about this Bok group.

“In training your teammates will also tell you what they hate when loose heads do certain things.

“We found find a way to help each other because we know it is for the good of the team, so I have been given a few pointers.

“Coach Daan Human is amazing when it comes to scrums,” Nyakane added.

“He knows his things and he gave me a few pointers as well.

“I went into the game confident that we had done the prep and the work.

“I had also been put into that position a few times during training, so I was confident enough to put on the jersey and put up  a performance.

“Earlier, in my younger days when I started playing, I was always a loose head, but there came a time in my career at unions where we were short of tight heads and so forth.

“I was asked to start playing in that position.

“At that time I would tell you I’m a loose head just helping out at tight head,” he said.

“But as time went on that started to change.

“If you asked me two weeks ago which position I preferred to play I would have easily said I’m a tight head and I  can cover loose head.

“But I’m a full-on tight head.

“This has nothing to with Trevor.

“This is about SA and the green and gold.

“Even if they want to put me at lock I would go.

“You have to try your utmost and give everything.”