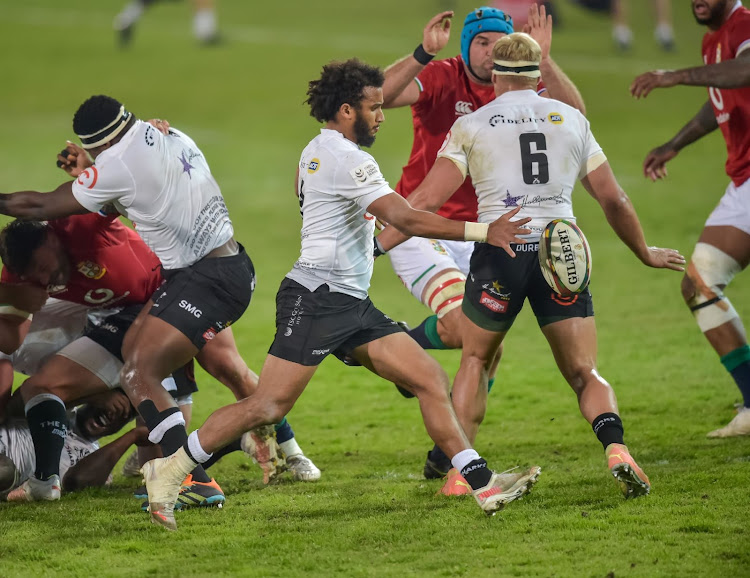 BAD MOVE: Jaden Hendrikse of the Cell C Sharks during the Tour match against the British and Irish Lions at Loftus Versfeld Stadium in Pretoria on Saturday
Image: CHRISTIAAN KOTZE/GALLO IMAGES

Sharks coach Sean Everitt says errant scrumhalf Jaden Hendrikse regrets the incident that saw him red-carded when the British and Irish Lions thrashed his team 71-31 at Loftus Versfeld on Saturday.

Until Hendrikse’s indiscretion the Sharks had been making a fist of their second match against the tourists, which was hastily scheduled after a Covid-19 outbreak in the Bulls camp.

After being blown away 54-7 in the first meeting between the sides at Ellis Park, the Lions were given something to think about in the opening half when they were held to a 26-26 scoreline.

Hendrikse had been impressive up until his premature exit and scored an intercept try.

Five minutes into the second half, Hendrikse was involved in a scuffle after making a tackle.

The TMO asked referee Wayne Barnes to review the incident and replays showed Hendrikse throwing an elbow into the head of the opposition player after completing a tackle.

Barnes showed Hendrikse a red card, which left  the Sharks with 14 men for 35 minutes.

“Jaden is not a malicious character, as we know,” Everitt said.

“Unfortunately, there was a bit of niggle in the game.

“He did something that he regrets.

“Jayden’s a youngster, he is only 20 years old and I think his emotions got the better of him and he will learn from that.

“When you are a youngster coming through, you are no different to the other scrumhalves that are chirpy.

“But, yes, he has to know when to draw the line.

“He will learn from this incident and it’s obviously our job as coaches to develop these young men as gentlemen to have respect for the opposition and match officials.

“We will have a chat to him.

“Off the field, funnily enough, he is totally the opposite — he is quiet and doesn’t say much.

“Shame, I do feel for him,” Everitt said.

“He is very remorseful.

“Nobody wants to get a red card against an international team and put your team under pressure.

“It’s a learning experience for him and I am sure it won’t happen again in the future.

“Despite the results, the Sharks will take many positives from this experience into the Currie Cup and United Rugby Championship, knowing that if they stick to their plans and work hard the results will come.”

Lions coach Warren Gatland said his team had not been at their best in the first half.

“We caused a few of our own problems with some of the turnovers, a couple of intercepts and some poor passes which allowed them into the game.

“We were a bit edgy and untidy,” he said.

“I think it is what is coming in the Test matches in terms of the SA team coming pretty hard and teams are trying to put us under pressure.

“We just need to make sure that we are a bit more accurate; tidier, and we did that a lot better in the second half.

“The players were well aware they’d forced a few passes and thrown a couple of bad ones, which allowed the Sharks the opportunity to score.”

An SA  “A” team is scheduled to face the Lions in Cape Town on Wednesday.