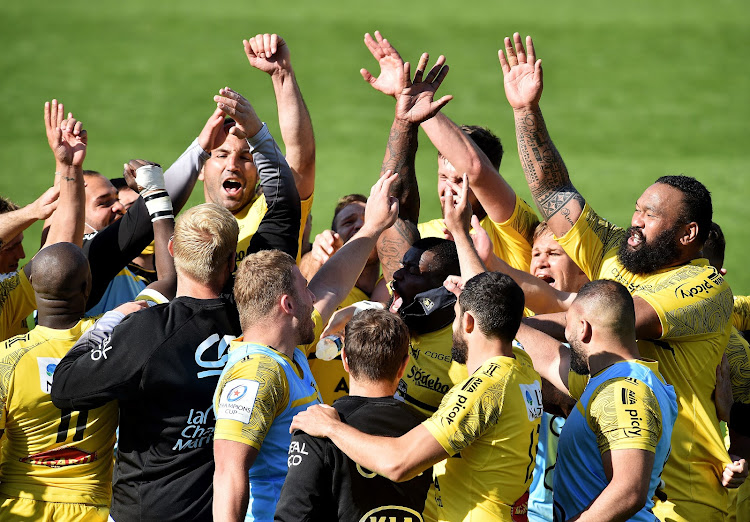 La Rochelle came from behind to beat four-time champions Leinster 32-23 at home with an impressive second half to set up an all-French final against Toulouse in the Champions Cup on Sunday.

Locks Will Skelton and Gregory Alldritt scored a try each with Ihaia West adding points with two conversions, a drop goal and five penalties in a near-perfect kicking display as the Top 14 side overturned a 13-12 halftime deficit.

Leinster scored through a Tadhg Furlong try and points from the boot of Ross Byrne, who also managed a late try, as they faded away after the interval as they were denied a third final in four years.

Four-time champions Toulouse qualified for the May 22 showdown at Twickenham with a 21-9 victory against Bordeaux Begles on Saturday.

Leinster had won 25 of their last 28 completed games in the Champions Cup, averaging 32 points scored per game across those victories. However, after a solid start they were overwhelmed by the La Rochelle pack, with Skelton instrumental for the hosts.

In their first semi-final appearance, La Rochelle were under early pressure, with Furlong bundling over as the visitors made the most of Wiaan Liebenberg's yellow card.

Byrne converted, only for West to narrow the deficit to one point with a penalty and a fine drop shot.

But La Rochelle paid the price of their ill discipline in their own half and Byrne added two more penalties that were cancelled out by West's own kicks as Leinster reached halftime with a 13-12 lead.

After a trade of penalties, James Lowe was sin-binned for not rolling away at a ruck 15 minutes into the second half and West slotted the penalty to put the French side ahead.

La Rochelle's power gave them control of the game and they were rewarded when Alldritt touched down after an early foray by Skelton.

Skelton virtually sealed the win with his side's second try before Byrne went over two minutes from time, but La Rochelle had already put themselves out of reach.