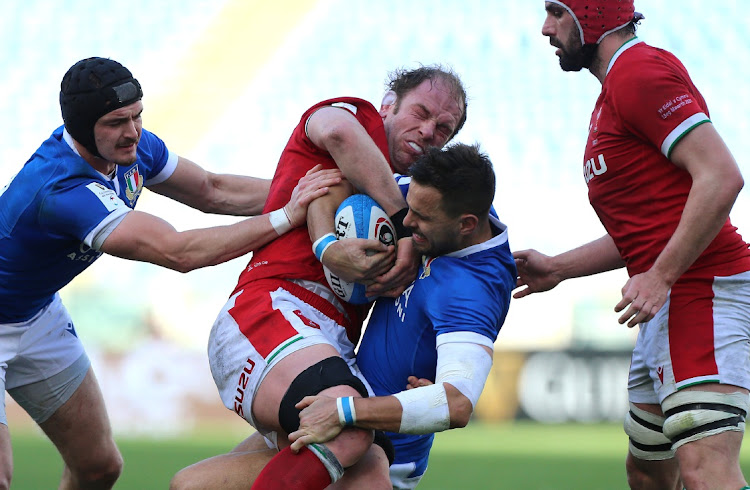 Mattia Bellini of Italy is tackled by Alun Wyn Jones of Wales during the Guinness Six Nations match at Stadio Olimpico on March 13, 2021 in Rome
Image: Paolo Bruno/Getty Images

Wales are one win away from a second Six Nations Grand Slam in three years but the final step in an unexpectedly successful campaign is likely to be the steepest when they take on a highly-fancied France team in Paris on Saturday.

As exciting as they might be, Les Bleus have some weaknesses as their 23-20 defeat by England on Saturday showed and Wales will be doing all they can to ensure the Welsh side do not have the space and freedom to set their livewire backline loose.

For France to take the title race to the final game - their rearranged fixture against Scotland - they will need to get better at finishing off matches after failing to sustain the pressure in the last 10 minutes at Twickenham.

"We were frustrated after the England game but we've moved on. We're still on course to win the championship and we will be ready, I'm sure of that," said centre Gael Fickou.

A bonus point victory against Wales and then Scotland should be enough to give Les Bleus the title. A losing bonus point for Wales could complicate matters and would see Wayne Pivac's team take the honours if France do not win with four tries.

France could also top the Six Nations standings by accumulating nine points, if they manage to overturn their current 24 match-points disadvantage to the Welsh.

Since coach Fabien Galthie took over at the beginning of 2020, France have rediscovered their touch and become more clinical, but Wales have also enjoyed a renaissance after winning only three of 10 tests last year.

They have scored 17 tries in four matches in this year's Six Nations but are well aware the France defence, overseen by their own former defence coach Shaun Edwards, has really tightened.

"How many levels will we have to go up? A good few," said Wales captain Alun Wyn Jones, who has been in superb form throughout the campaign.

Pivac added: "We know we'll be in for a massive game. We've been on the receiving end of the result both times against France."

Hooker Ken Owens said the squad's trust in Pivac's principles had been key in Wales's resurrection after they lost seven tests last year - two of them to France.

“We’re taking our opportunities and trying to spread the ball a lot more," he said. “We've had some individual brilliance throughout the competition... things are definitely clicking."

The same applies to France this year, with Les Bleus showing some jaw-dropping moves, which they hope will be enough against Wales after the Covid-19 outbreak in the French squad sidelined them for four weeks before the England game.

"It's true that recently we've been scoring a lot of tries thanks to players like (centre) Virimi (Vakatawa), (wingers) Damian (Penaud) and Teddy (Thomas), (scrumhalf) Antoine (Dupont)," said Fickou.

"They're an added strength. We're going to have to use those weapons against Wales."