Rennie swaps props as Wallabies look to 'step up' against Pumas 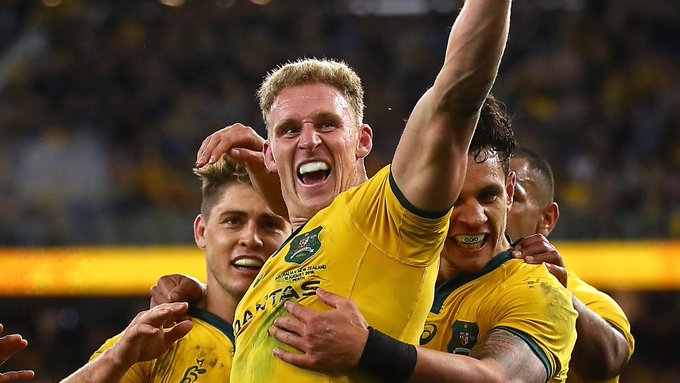 Australia coach Dave Rennie has shuffled his front row forwards but left the starting side largely intact as the Wallabies seek a Tri-Nations victory over high-flying Argentina and back-to-back wins for the first time this season.

Rennie has brought in experienced prop Scott Sio to replace injured loosehead James Slipper while promoting tighthead Taniela Tupou from the bench in place of Allan Alaalatoa for Saturday's clash in Newcastle.

Ned Hanigan, who replaces the suspended Lachie Swinton at blindside flanker, is the only other change to the starting 15 that celebrated a 24-22 win over the All Blacks in Brisbane this month, Rennie's first victory in charge of the Wallabies.

Pre-tournament, the hosts might have pencilled in a win from their first encounter with Argentina, given their lack of matches in a pandemic-blighted year.

However, the South Americans tore up the script with a stunning 25-15 win over the All Blacks last week and now loom as a huge threat to the Wallabies' title hopes.

"We need to take another step up now," Rennie told reporters on Thursday.

"It’s a chance for us to show that we are developing and getting better and a win would put us in a pretty strong position."

Sio was omitted from Brisbane but beats out young prop Angus Bell, who remains on the bench after a solid test debut at Lang Park.

"We felt he lacked impact when he was coming into the game and we wanted more out of him," Rennie said of dropping Sio.

"We got the reaction we expected from Scott, his preparation this week has been excellent."

With James O'Connor still sidelined, utility back Reece Hodge has been rewarded with another start at flyhalf in an unchanged backline following his key role in the Wallabies' win in Brisbane.

Rennie has made a couple of changes on the bench, with Rob Valetini included as cover for the second and back rows, and Jake Gordon recalled as backup scrumhalf for Nic White.

Argentina coach Mario Ledesma has kept faith with the players who beat the All Blacks for the first time last Saturday.

Ledesma has restricted himself to tweaking his bench for Saturday's match at Hunter Stadium.

Bulldozing blindside flanker Pablo Matera will again captain the side and the experienced Nicolas Sanchez retains the number 10 shirt after scoring all of Argentina's points against the All Blacks at Western Sydney Stadium.

In the replacements, Santiago Socino replaces Facundo Bosch as back-up for starting hooker Julian Montoya, while Toulon's Facundo Isa looks set to win his first cap since August 2019 after being named as back row cover instead of Tomas Lezana.

Lucio Cinti, who failed to get on the pitch to win his first cap last week, drops out of the matchday squad with Emiliano Boffelli covering for the outside backs and potentially offering a long-range kicking option.

The Tri-Nations replaced the Rugby Championship this year after world champions South Africa withdrew and Argentina's win last week blew open the race for the title.

A win for either side on Saturday will move them above New Zealand to the top of the standings.