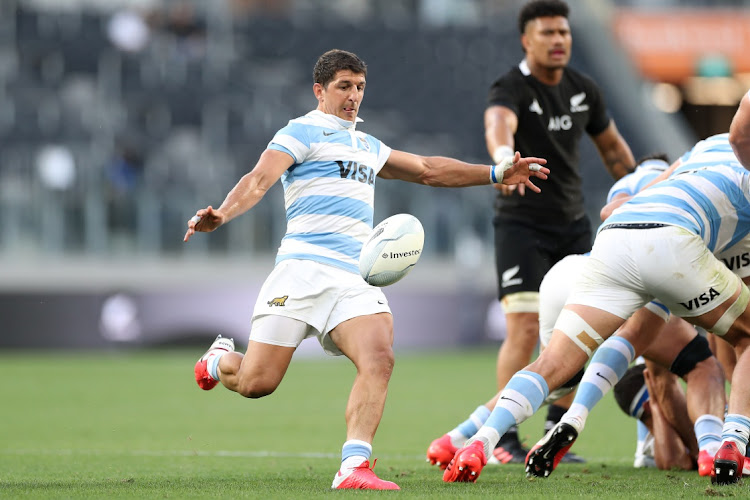 Tomas Cubelli of the Pumas kicks the ball during the Tri-Nations rugby match against the All Blacks at Bankwest Stadium on November 14, 2020 in Sydney
Image: Mark Kolbe / Getty Images

Rugby Australia Chairman Hamish McLennan has said the governing body should "help" Argentina by allowing more Pumas players held back by the pandemic to compete in the domestic Super Rugby AU competition.

Scores of internationals who played for the Buenos Aires-based Jaguares, Argentina's sole team in Super Rugby, have been unable to play top flight rugby since the competition was shut down in March due to the Covid-19 outbreak.

While Australia, New Zealand and South Africa have put on domestic competitions featuring their Super Rugby teams, the Jaguares have been frozen out and their players encouraged by management to seek contracts elsewhere.

"I applaud the Western Force for making those moves," he told the Sydney Morning Herald.

"We should help (Argentina) out and help create the world's best Super Rugby competition."

Argentina's players underlined their quality by pulling off a stunning 25-15 win over the All Blacks in the Tri-Nations on Saturday, despite not playing a test since the World Cup more than a year ago.

McLennan said he had spoken to former Argentina captain Agustin Pichot who Australia backed in a failed bid for the World Rugby chairmanship earlier this year.

"He's a good man and he has gone to great lengths to support his players. We should support him," he said.

SARU said in September it was exploring moving four of the country's five Super Rugby franchises to the northern hemisphere's PRO14 competition, potentially leaving some home-based players at a loose end.

"We will take some players from South Africa, if we can," said McLennan.

Australia play Argentina in the Tri-Nations in Newcastle on Saturday.