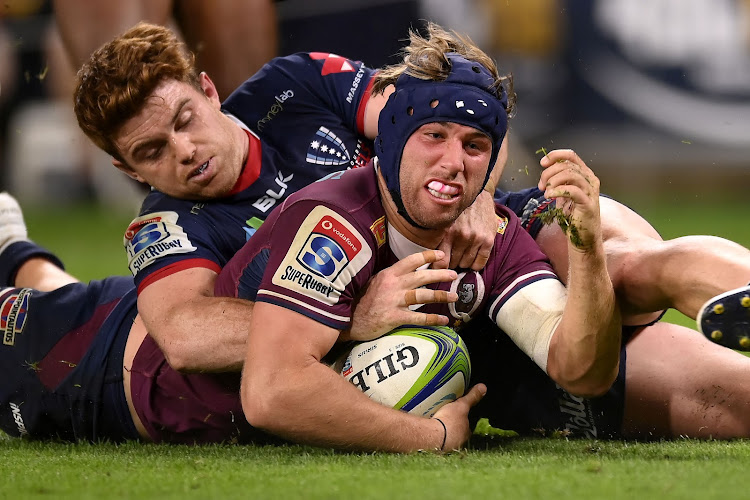 Hamish Stewart of the Reds scores a try during the round seven Super Rugby AU against the Melbourne Rebels at Suncorp Stadium on August 15, 2020 in Brisbane, Australia.
Image: Albert Perez/Getty Images

The second season of Super Rugby AU will kick off in February, returning top flight rugby union in Australia to its traditional autumn slot in 2021.

The five-team domestic competition filled the breach in Australia from July through September this year after the wider Super Rugby season was shut down in March due to the Covid-19 pandemic.

With Covid-19 virtually eliminated in Australia, Super Rugby AU's second instalment will be a genuine home-and-away season rather than having teams confined to biosecure hubs in eastern states as happened this year.

The season kicks off with a Friday double-header on February 19 with Queensland Reds playing the New South Wales Waratahs at Lang Park in Brisbane, followed by Western Force hosting the defending champions ACT Brumbies in Perth.

All teams play each other twice over 10 rounds before the two-week finals series starts on May 1, as per the schedule released by Rugby Australia (RA) on Wednesday.

RA confirmed the schedule two days after announcing a three-year broadcasting deal worth A$100 million ($73 million) which has shored up the game's financial position after months of uncertainty.

From Super Rugby's second round, the deal includes a free-to-air broadcast of one Saturday game per week on the Nine Network. The other games will be carried on Nine's streaming platform Stan.

Super Rugby was previously available only behind a pay-wall on pay TV provider Foxtel, which ends its two-decade long relationship with Australian rugby union at the end of the year.

New Zealand confirmed the schedule for the second season of their domestic Super Rugby Aotearoa on Tuesday.

Australia and New Zealand are working on organising a cross-over tournament, which could also involve South Africa's Super Rugby teams, at the end of their domestic competitions.