Proteas shaping up well ahead of World Cup, Shamsi says 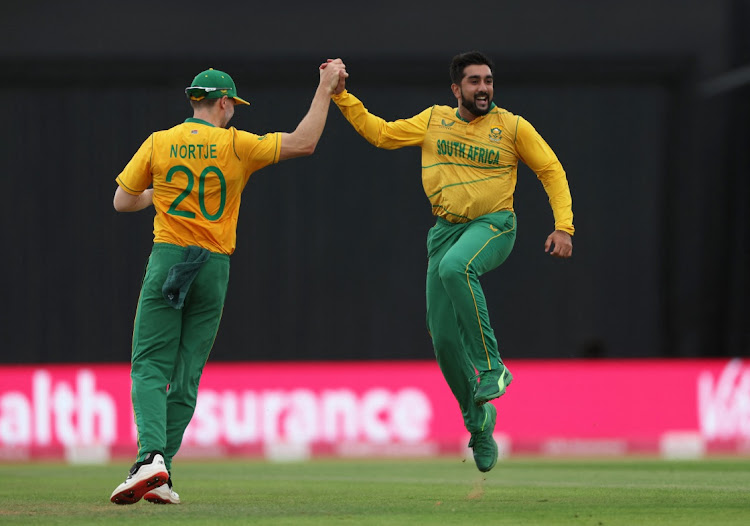 Proteas spin wizard Tabraiz Shamsi believes the squad can take much confidence from their all-round performance after securing a thrilling T20 series victory over England on Sunday.

The 32-year-old put in a man-of-the-match display in the final match in Southampton, taking five wickets in his four overs while conceding just six an over.

Before that, the SA batters, led by a third half-century of the series from Reeza Hendricks and Aiden Markram’s 51, saw the Proteas to a commanding 191.

The hosts were rattled by the loss of their first five wickets for just 65 runs, as Keshav Maharaj bagged two wickets, with Anrich Nortje, Andile Phehlukwayo and Markram contributing to the early collapse.

The English lower order was then bamboozled by Shamsi’s left-arm unorthodox spin to remove the remaining five batsmen for the addition of just 36 runs to secure a memorable 90-run victory at the Rose Bowl.

“It was brilliant. Starting with the batsmen, to the fielding and then the bowlers as well,” Shamsi said.

“It was not just me, the guys who bowled before me did a great job as well.

“There is a nice thing building within our team.

“We have been on the journey since last year, before the World Cup, so there is a good amount of confidence in the team.”

Asked if he felt any pressure from fans’ expectations of him to take wickets regularly, Shamsi said the key to dealing with that was to know exactly what the captain required of him in each match.

“I try to go on what the captain wants from me on the day and probably Quinny [Quinton de Kock] behind the stumps.

“That is what I try to gauge things from and try to do whatever the team needs on the day for us to win the game.”

He also felt that the bigger grounds to be used for the World Cup in Australia would  highlight the skill of the batsman versus that of the bowler and who could execute their skills better.

“As a bowler, that [bigger grounds] helps, because you can come up with certain game plans to try to counter what the batsmen might try to do.”

SA travel to Bristol for two T20s against Ireland on Wednesday and Friday which will effectively be their final chance to see who makes the squad for the international showpiece, before heading to Lord’s for the first of three Test matches against England.