Klaasen’s knock one of the best he’s seen, Miller says 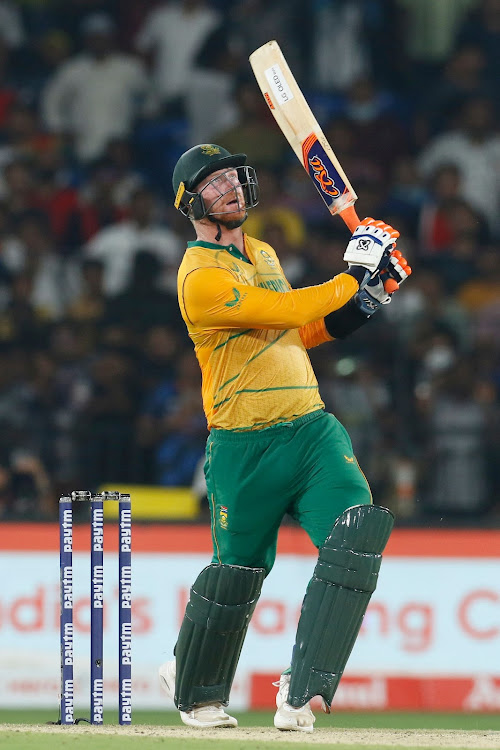 ON SONG: SA’s Heinrich Klaasen plays an aggressive stroke against India in the second T20 at the Barabati Stadium, Cuttack, on Sunday.
Image: DEEPAK MALIK/ SPORTZPICS FOR BCCI

Proteas middle order blacksmith David Miller heaped praise on Heinrich Klaasen after the wicketkeeper’s heroics with the bat in the second T20 international against India in Cuttack on Sunday.

Klaasen, who was a late replacement for the injured Quinton de Kock, smashed 81 off only 46 balls to help SA to victory by four wickets.

The result saw SA take a 2-0 lead in the five-match series.

Miller said it was an innings for the ages.

“Klaasy hasn’t played much recently and for him to come in and play the way he did,” he said.

“His knock was phenomenal and one of the best I have seen.

“The conditions in which he played and to come out and do what he did made it easy for us at the back end.”

“It was a great win.

“It was a bit of a tricky wicket as we all knew.

“We weren’t in trouble but they bowled really well up front in the first 10 overs.

“It was about playing your game and not worrying about the wicket.

“If it is keeping low it gets in your head as a batter, so you are not quite sure whether to go forward or not.

“It was about looking to play straight. It was a little bit up and down, but we managed to finish it.”

Miller has been in superb form of late and explained why Klaasen had come to the crease before him.

“It was the coach and captain’s decision, and was more to just hold me back, but Klaasy proved us wrong,” he said.

“It is really tough to win here, so to have a win like this and be 2-0 up is a great achievement.

“We are on the right track, but there’s still a lot of cricket to be played.”

Klaasen said De Kock had warned him a couple of days earlier that he could be in line for a game.

“Quinny came up to me two days back in the team bus and said he had injured his wrist,” he said.

“He is a strong character and I thought he would be fine,” Klaasen said.

“But yesterday [Saturday] again, he said his hand was not fine.

“Yesterday morning, we came to training and the coach told me I might play.

“I am glad the knock came against India.

“I hope it extends my career longer.

“I haven’t performed well in the last couple of years.

“I am very happy and confident about being here.”

The third match is in Visakhapatnam on Tuesday (3.30pm) — SuperSport, espncricinfo.com