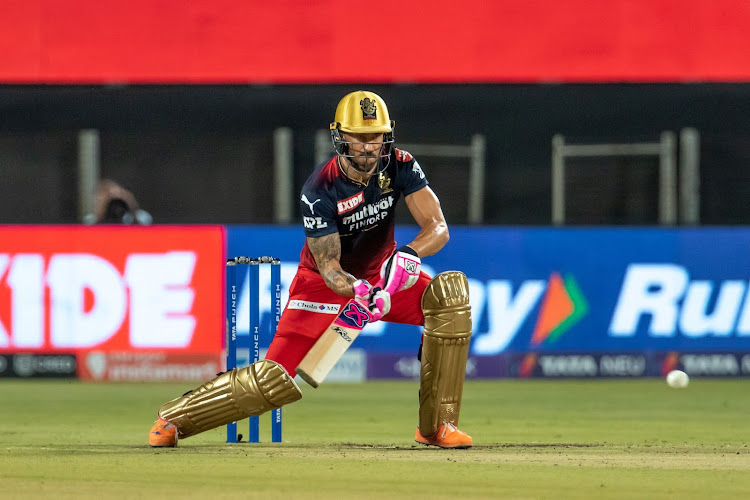 Faf du Plessis captain of Royal Challengers Bangalore plays a shot during the TATA Indian Premier League against the Chennai Super Kings at the MCA International Stadium in Pune on May 4, 2022
Image: Vipin Pawar / Sportzpics for IPL

Royal Challengers Bangalore captain Faf du Plessis has called on his batsmen to play a positive brand of cricket as the playoff race heats up in the Indian Premier League (IPL).

Bangalore, chasing their maiden IPL title, beat holders Chennai Super Kings by 13 runs on Wednesday to snap their three-match losing streak and climb to fourth in the standings.

“We definitely needed that, just for the confidence in the group,” former SA captain du Plessis said.

“To put up a decent total on a wicket with a bit of challenge in it, I think we're definitely moving in the right direction with the batting line-up ...”

Du Plessis and former captain Virat Kohli put on 62 runs for the opening stand but it was Mahipal Lomror's 42 off 27 balls and their sharp bowling that set up Bangalore's sixth win after 11 group matches.

A resurgent Sunrisers Hyderabad are two points behind Bangalore having played two fewer games, level with Punjab Kings, who have 10 points from 10 matches.

Du Plessis wanted his batsmen to stay on the front foot to keep Bangalore in the race for a top-four spot.

“Just keep improving in the batting department, we are doing that,” the 37-year-old said.

“We are trying to find one of the top four to bat through and get that 70-plus score because we've got enough power around that to come in.

“So it's just that consistency around the batting unit and keep making sure we play a positive brand of cricket and not be too defensive especially towards the business end of the tournament ...”

It may eventually boil down to net run rate but du Plessis is focused on winning their next three matches.