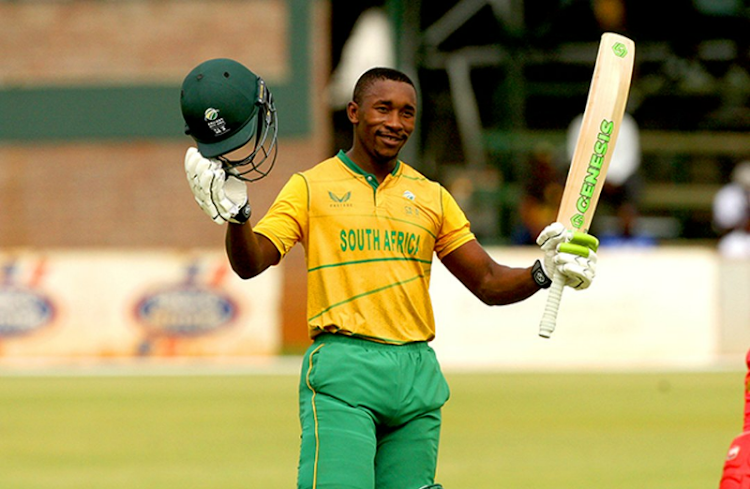 A veritable blitzkrieg by Lesiba Ngoepe saw him smash 114 runs from just 63 balls to set the foundation for victory by 22 runs for the SA ‘A’ team against Zimbabwe XI at the Sports Club on Wednesday.

They go 2-0 up in the five-match series.

The tourists changed tack and got their just rewards for moving Ngoepe up the order to open the batting with Reeza Hendricks.

The pair were relentless with the bat, sharing a huge, 142-run stand that lasted 12.3 overs, spearheading their side to 224/4 at the end of their allotted 20.

Ngoepe’s outstanding knock included 13 fours and five sixes, while Hendricks smashed nine boundaries and four maximums in his dash to 77 off 35.

Other notable contributions came from Tristan Stubbs and Wihan Lubbe who returned an unbeaten 17 off nine deliveries and 10 off eight respectively.

Zimbabwe’s bowlers had no answers as the visitors stormed their way through the overs. Tendai Chatara (1/37), Sikandar Raza (1/37), Tanaka Chivanga (1/45) and Ernest Masuku (1/65) could only manage one wicket each in a day that firmly belonged to the South Africans.

Things went from bad to worse when the Zimbabwean batting reply began.

They lost their first wicket in the second-last ball of their opening over, seeing Takudzwanashe Kaitano back in the hut for just a single at the hands of Bjorn Fortuin (2/36).

Lizaad Williams (3/38) struck twice off consecutive balls in the fourth over, missing out on a hat-trick when he dismissed Wesley Madhevere and Craig Ervine for 19 and 14 runs respectively.

Gerald Coetzee (2/31) caused further stress with his dispatching of Tinotenda Mutombodzi (13 off 8) in the seventh over, but a captain’s knock by Sikandar Raza saw him smash 82 from 42 deliveries (2x4s, 9x6s), bringing some relief and excitement to their struggling cause.

Ryan Burl (30 off 16) was a not-so-quiet secondary force on the opposite end, adding his own impressive contribution to the mission.

Their 83-run, fifth-wicket partnership ended at the hands of Coetzee, who struck once more, this time in the 14th over after Burl tried to go too big after a flurry of sixes from him and his captain in the previous overs.

The skipper then departed in the 16th over with 53 runs still needed to level the series.

It was too big an ask in the end for the home team, Masuku (10) and Wellington Masakadza (8) succumbed to the pressure and the hosts were eventually restricted to 202/9 at the end of their innings. Chivanga and Chatara not out for six and three runs respectively.

The third match will take place at the same venue on Friday, 6 May. — Cricket SA