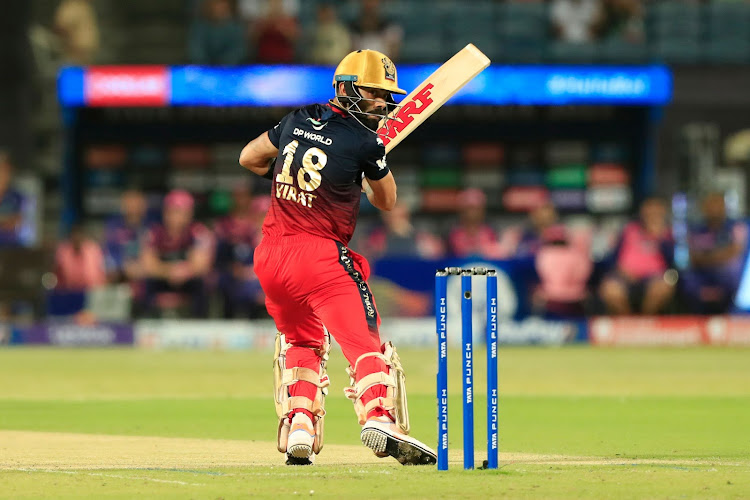 Virat Kohli of Royal Challengers Bangalore during the TATA Indian Premier League match against the Rajasthan Royals at the MCA International Stadium in Pune on April 26, 2022
Image: Pankaj Nangia / Sportzpics for IPL

Royal Challengers Bangalore captain Faf du Plessis backed Virat Kohli to come good with the bat after he was out for a low score in the Indian Premier League once again on Tuesday as his team slumped to a fourth defeat of the season.

Chasing 145 for victory against Rajasthan Royals, Bangalore folded for 115 to suffer a 29-run defeat in their ninth match of the annual Twenty20 tournament.

Rajasthan, who posted 144-8 after being put in to bat first, registered their sixth win from eight matches to climb to the top of the IPL table.

The 33-year-old Kohli, who has scored over 23,500 runs for India in international cricket, made nine on Tuesday, taking his tally to 128 runs from nine matches this season.

Out on the first delivery he faced in his last two outings, Kohli was asked to move up the order from his usual number three spot to open the innings against Rajasthan but the move did not bear fruit.

“We discussed after the previous match, thinking of ways of trying to get the best out of Virat,” former SA captain Du Plessis said at the presentation.

“Great players go through things like this and great characters have to find a way to get through it. Our thinking was to get him into the game straight away so he doesn't sit on the side and almost think too much about the game.

“He's a fantastic cricketer. We still back him that he will turn it about and it's just the case of getting a good start and feeling one or two balls hit the middle of the bat. It's a game of confidence.”

Kohli, who has stepped down as India and Bangalore captain in recent months, was expected to dominate the run-scoring charts without the burden of leadership on his shoulders.

His repeated failures have prompted some pundits to suggest he needs a break from the game but Bangalore coach Sanjay Bangar said Kohli had “seen these highs and lows plenty of times”.

“He has the spirit and he is a fighter,” he told reporters. “He will emerge stronger and win us games in upcoming matches.” — Reuters