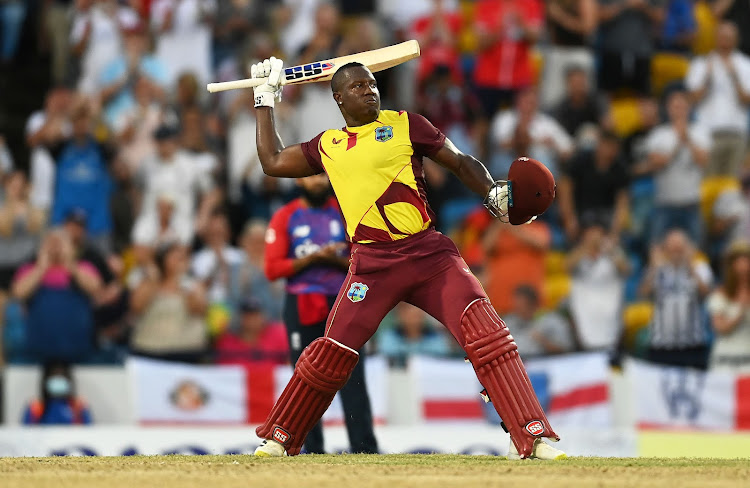 A blistering 107 from Rovman Powell and Nicholas Pooran's half-century helped West Indies secure a 20-run victory over England in Bridgetown and take a 2-1 lead in the five-match Twenty20 International series.

After losing the second match by one run, the hosts posted a challenging 224-5 in 20 overs with Powell's 53-ball knock including 10 sixes and four boundaries.

He combined well with Pooran, who scored 70 from 43 balls, as the pair put on 122 runs for the third wicket after England won the toss and opted to field.

England, who were without injured skipper Eoin Morgan and handed debuts to three players, managed 204-9 in 20 overs, including a battling 73 by Tom Banton and 57 by Phil Salt lower down the order in his first T20 international game.

“Kudos to Rovman. He came in and took his chance,” Pollard said. “We had a good discussion about our batting and what we wanted to do. It was a complete game, I'm happy for the guys.

“The challenge is coming back again, we want to replicate that performance.”

England stand-in skipper Moeen Ali said the side had missed Morgan's influence but looked forward to the final two matches on Saturday and Sunday.

“A fantastic partnership took the game away from us but proud of the way the boys batted at the end,” Moeen said. “We've got guys putting their hands up ... We're confident in our side and we said from the start it would be a brilliant series.”

•Kemar Roach was called up to the West Indies one-day squad for the first time in nearly two-and-half years on Thursday with the fast bowler returning for next month's three-match series against India, Cricket West Indies said.

The 33-year-old from Barbados has been a regular in West Indies Test squads but played the last of his 92 one-dayers against India at Port of Spain in August 2019.

“Kemar Roach is one of our leading fast bowlers and we believe we need bowlers upfront to get early wicket,” newly-appointed chief selector Desmond Haynes said in a statement.

"...Kemar, with an economy rate of five, is certainly good enough to play.”

“We want to have competition for places. We want to reach a stage where we have a lot of players fighting for positions,” former Test stalwart Haynes said.

“We want to broaden the pool of players we have to choose from. The team we have selected is a very good side and we are looking at this tour as part of the preparations for the World Cup in India in 2023.”

Beginning on February 6, West Indies will play three one-dayers in Ahmadabad to be followed by an equal number of Twenty20 Internationals in Kolkata.

The Twenty20 squad will be announced on Friday.