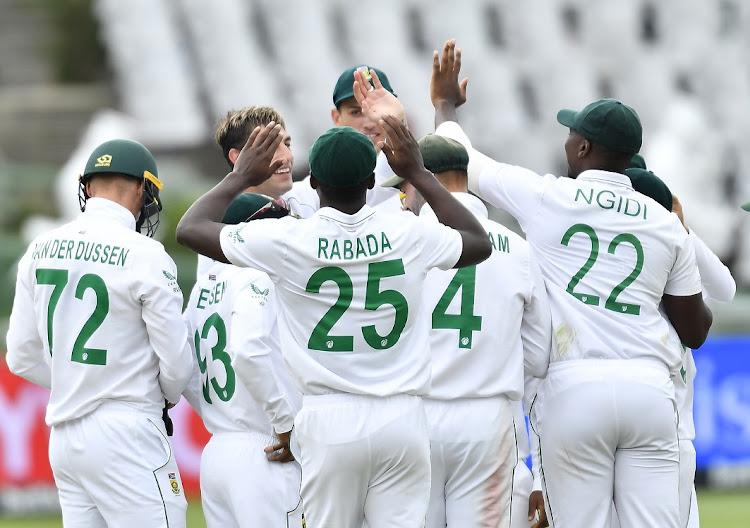 Duanne Olivier and his SA teammates celebrate the wicket of KL Rahul of India on day one of the third Test at Newlands in Cape Town on January 11 2022.
Image: Ashley Vlotman/Gallo Images

SA made some telling inroads before India settled to reach lunch on 75/2 on the first day of the third and deciding Test at Newlands on Tuesday.

India reached the lunch break with captain Virat Kohli (15) and Cheteshwar Pujara (26) the not out batters.

Their openers, however, were removed cheaply leaving India on 33/2 after Kagiso Rabada and Duanne Olivier bagged a wicket each but Kohli, despite a sedate start, and Pujara negotiated the remainder of the session.

This match started to mildly anti-climatic scenes. Newlands, usually bathed in sunshine and packed to the brim, was just about empty and cloaked in cloud. It felt devoid of bodies and soul.

The slight drizzle that threatened to delay the start was perhaps the cricket gods weeping.

India won the toss again, and opted to bat, again. Under leaden skies their openers, KL Rahul and Mayank Agarwal, were required to proceed with extreme caution.

They did that initially but Rabada, running in from the Wynberg End, had just cause for the spring in his step.

On the occasion of his 50th Test he pretty much hit his length from the outset. Moreover, his line was impeccable, probing on and around off stump, as did fellow quick Olivier from the other Kelvin End.

It was Rabada who engineered the first real opportunity when Agarwal reached for a delivery and edged it to the right of a diving Keegan Petersen at third slip. Had Marco Jansen occupied that position instead of the diminutive Petersen he may well have pouched a knee-high catch to his right. Petersen did exceptionally well to get his right hand to the ball but the chance went begging.

Rabada and Olivier kept plugging away and both found reward as they dispensed of the India openers with deliveries that teased outside off-stump.

First Olivier induced the edge of Rahul's bat to be caught behind before Rabada had Agarwal caught by Aiden Markram at second slip. The opener may well lament not playing tighter to his body.

SA opted to go into the match with an unchanged team from the one that triumphed in the second Test at the Wanderers, while India brought in Kohli, who has recovered from back spasms, and Umesh Yadav, who replaced the injured Mohammed Siraj.