Kohli's back but SA face some teasers 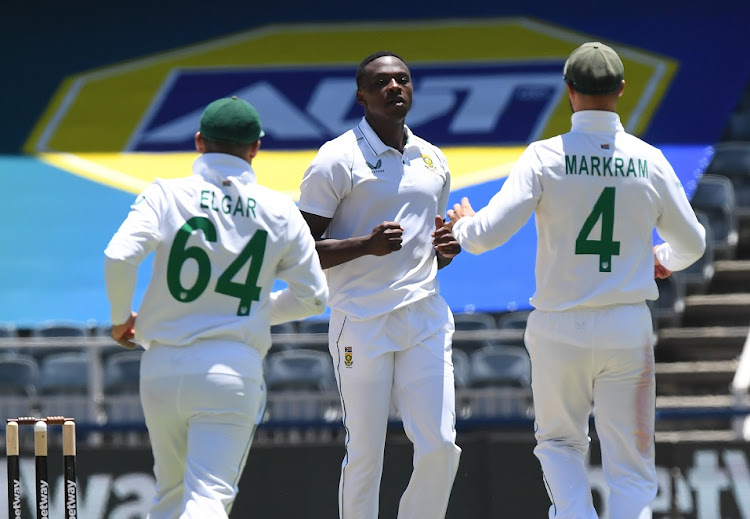 Kagiso Rabada celebrates his dismissal of India's Cheteshwar Pujara with teammates Dean Elgar and Aiden Markram during the second Test. The third Test at Newlands will be Rabada's 50th.
Image: Sydney Seshibedi/Gallo Images

Perhaps more than is ordinarily the case the spectre of defeat will be particularly unpalatable for SA and India as they go into the third and deciding Test that starts at Newlands on Tuesday.

Hard-earned reputations are at stake for both teams as defeat, and thus a series loss, may have serious implications in both camps. Uncomfortable questions are being asked of the SA brains trust, while India, particularly their batting line-up, in recent times anyway, have age and average the wrong side of 30 respectively.

Despite a magnificent comeback to win the second Test at the Wanderers to level the series, SA will ask some searching questions before they unveil the starting XI on Tuesday.

Though it required a huge effort to keep the series alive, there was the sentiment, even expressed by coach Mark Boucher, that they were far from perfect.

They will need to operate near that against opposition that have won in England and Australia. India are unlikely to be off colour in back-to-back Tests.

Balance of the team

SA will in particular have to interrogate whether the balance of their team needs to be altered.

At the Wanderers their tail appeared long after Wiaan Mulder was jettisoned, but whether they will go the four seamers and a spinner route again remains to be seen.

At the Wanderers, Marco Jansen batted at seven but his prowess with the bat at age group level has been usurped by an ability to take wickets and generally make things uncomfortable for whoever faces him

Mulder is yet to replicate his domestic first-class form with the bat at Test level but he hasn't played enough to make a definitive judgment.

What is clear, however, from SA's past five Tests at Newlands, is that their lower order needs some solidifying. In the Tests in the shadow of Table Mountain against England, Pakistan, Australia, India and Sri Lanka their last five wickets have on average fallen for the addition of 108 runs.

If there is the need to bolster their batting who will they leave out? Left-arm spinner Keshav Maharaj who has bowled just 20 overs in the first two Tests of the series is a shoo in at Newlands, not just for his wicket-taking capacity, but for what is likely to be a considerable workload.

Maharaj of course has made some useful contributions in the lower order, while Kagiso Rabada is yet to add substance to the undoubted style he brings to the crease.

He will be playing in his 50th Test and apart from being fired up with the ball, he will be desperate to notch a half ton of another kind at Newlands.

With the ball Jansen has made a highly promising start to his Test career, while Duanne Olivier has returned from the Test wilderness with some aplomb. Some, however, feel he is at most risk should the lower order be altered.

India, of course, will celebrate the return of the talismanic captain Kohli.

“Yes, I am absolutely fit,” assured Kohli but the prognosis was a lot bleaker for Mohammed Siraj.

“Siraj, obviously, had a niggle in the last game, and at the moment, I do not think he is match ready to take the field in the third Test.”

Though Kohli returns to the side on the cusp of his 100th Test, he may feel the need to silence nagging questions about his form.

The most experienced members of the India batting unit, Kohli, Ajinkya Rahane and Cheteshwar Pujara, have struggled since the onset of the pandemic. Since the start of 2020 they have averaged less than 30 in Test matches. Experience and class, Kohli was quick to remind, are formidable assets.

“Jinks and Pujara, the way they batted in the second innings, that experience is obviously priceless for us, and especially in series like these where you know these guys have done the job in the past and when you are playing overseas, in tough conditions, these guys will always step up with impact performances.