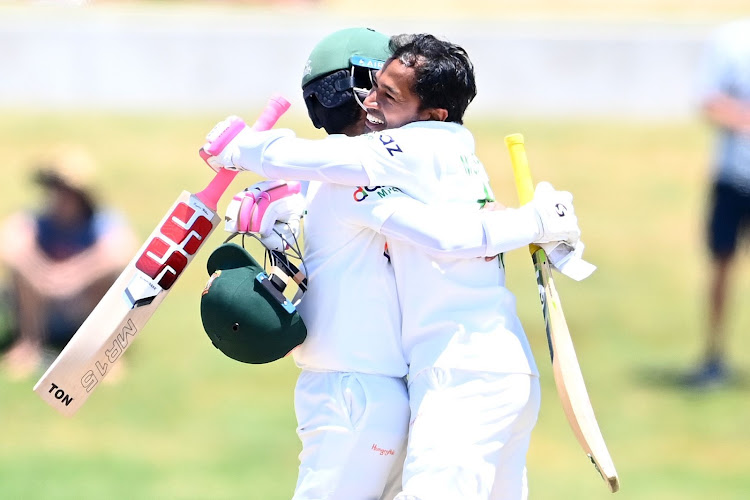 Mominul Haque and Mushfiqur Rahim of Bangladesh celebrate after beating New Zealand on day five of the first Test at Bay Oval on January 5, 2022 in Tauranga
Image: Hannah Peters/Getty Images

Mominul Haque hailed Bangladesh's “unbelievable” win over New Zealand on Wednesday after they beat the world Test champions by eight wickets to end the 'Black Caps' run of 17 matches without defeat on home soil.

Seamer Ebadot Hossain took a career best 6-46 as the tourists dismissed New Zealand for 169 early on day five at Mount Maunganui and then knocked off the 40 runs for victory for the loss of two wickets.

It was Bangladesh's first win in any format of the game in New Zealand and gave them a 1-0 lead in the two-match series.

“I can't describe it, it's unbelievable. I couldn't sleep yesterday because of the pressure,” skipper Mominul told reporters.

“It was very important to win this Test match. Two years ago, we didn't play that much Test cricket, so we were keen to improve.

“This could be a sign of our improvement in Test cricket. Everyone supported each other during this match. I have said in the past that playing well collectively is the key to our success.”

Bangladesh had gone into the match focusing on the process rather than the result, he added.

“You have to have a clear mindset, before playing anywhere. If you're going out of the subcontinent, and you think to yourself that 'it will be tough,' then it will be tough,” said Mominul.

“We didn't focus too much on the result of the Test matches, we tried to focus on the process.”

The Bangladesh captain also praised the performance of Ebadot, saying he had worked really well over the last two or three years, and added that the bowling attack was the star of the show.

“He has come from the Air Force and used to be a volleyball player,” Mominul added. “Our coaching staff did a lot of work to support him and helped him bowl in the right areas, and it was an unbelievable spell from him.

“The bowlers played the biggest part in this win. Winning a Test match with four bowlers is unbelievable.”

Mominul was also keen to temper expectations for Test cricket's ninth-ranked side despite the huge win.

“It helped that there was no expectation from us,” he said. “And I also want to say that don't expect us to become the number five or six in the world in tests in the next one or two years.”

New Zealand, winners of the inaugural World Test Championship after beating India last year, are without regular skipper Kane Williamson for the series because of an elbow injury but were still expected to comfortably beat a young Bangladesh side.

“It was obviously a disappointing performance, we weren't at our best,” said stand-in captain Tom Latham.

“Full respect to (Bangladesh), they certainly outplayed us throughout the five days.”

The second Test of the series will be played at the Hagley Oval in Christchurch from January 9-13.  — Reuters