But their batters will have to dig in on day 2 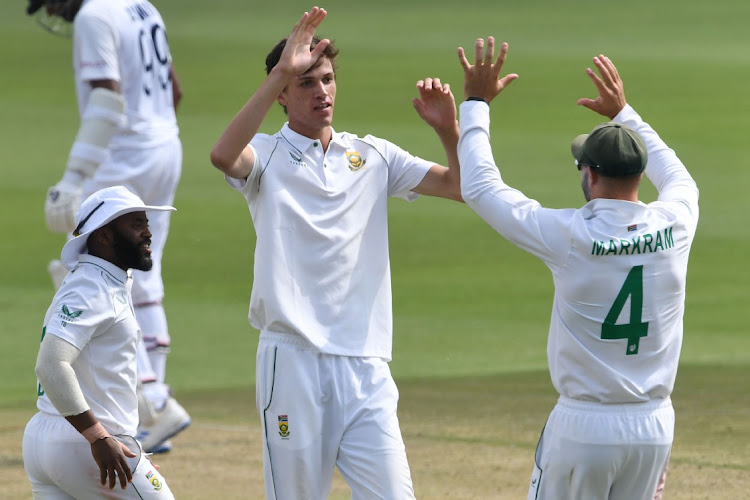 Marco Jansen celebrates the wicket of Rishabh Pant on the first day of the second Test against India at the Wanderers.
Image: Lee Warren

Marco Jansen's stock as Test cricketer continued to grow, Kagiso Rabada showcased his enduring quality, while Duanne Olivier reminded of his value to the national cause on the opening day of the second Test against India at the Wanderers.

Having lost the opening Test in Centurion, as well as the toss here, SA were under pressure to set the tone — and they did. They bowled India out for 202 and were 35/1 at stumps, with captain Dean Elgar and Keegan Petersen at the crease.

Though they failed to produce the penetration to make early inroads, they did splendidly in the periods leading up to lunch and tea to wrest control on the opening day.

That is the second lowest total of teams batting first in the last five Tests at this ground, but perhaps significantly it is 15 runs more than what India amassed here in 2018 when they ended up winning by 63 runs. That perhaps more than anything else should serve as warning to the hosts that they need to make good on the gains made.

It will require them to bat with application on the second day.

The portents, however, did not look good when their opening partnership again failed to dig in. Aiden Markram again fell to the charms of Mohammed Shami, who trapped him LBW for seven with the total on just 14.

Elgar and Petersen then negotiated the tricky period to stumps.

SA however were placed in a position of promise by a seam attack that took a while to get going. They only made a breakthrough after the first drinks break when Jansen got Mayank Agarwal to nick one.

Jansen has gone from strength to strength since his nervy debut burst in the first Test. He offers variation with left arm seam that often arrives at a disconcerting height.

Though Jansen made the initial breakthrough, it was Olivier who dragged the rest of the attack along after settling into a more searching line of interrogation of the batters' technique.

To be fair, there were also some lamentable shots in the India first innings, as was the case in the dismissals of Rahane and Shardul Thakur. Ravichandran Ashwin also played a shot better suited to the white ball but he did face the looming prospect of running out of willing and able partners.

Rahane and Thakur's dismissals stood in stark contrast to the way in which KL Rahul went about his business. The man of the match in the first Test, batted with considerably more restraint having had to step into the breach for missing captain Virat Kohli.

The regular captain, who ostensibly was left out on account of spasms in his upper back, is the only player who averages more than 50 in Tests in the current team.

As such his absence was always going to leave a huge hole in the India batting unit and Rahul keenly felt that responsibility as he went about constructing his innings.

Rahul limited his engagement with the ball only when he really had to, or when a gift wrapped opportunity was on offering. He was often beaten outside off stump but he also left the ball judiciously.

He reached his 50 off 128 grinding deliveries and would have been miffed with himself when he five deliveries later before being caught smartly by a diving Kagiso Rabada at fine leg.

Kohli's absence perhaps too shone a harsher light on the exploits of Pujara and Rahane, the next two most experienced and accomplished batsmen in the touring team. Both, however, have been short of the form that made them fixtures in the India team over the last decade. Their cheap dismissals helped set up a profitable first day for SA.