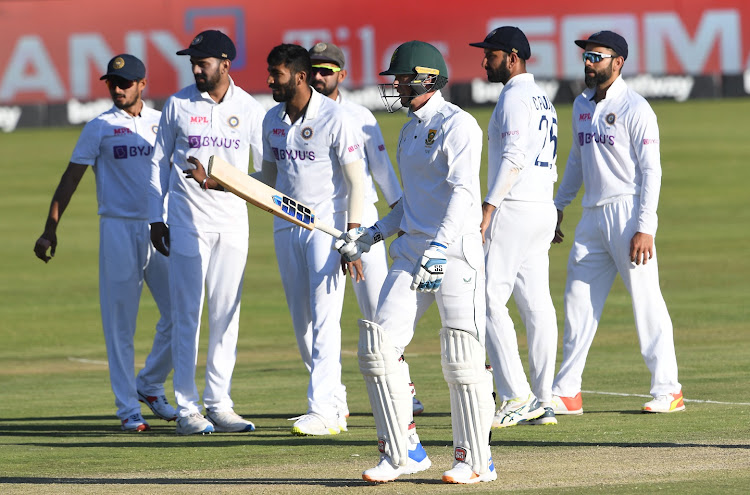 Rassie van der Dussen out for 11 on day four of the first Test against India at SuperSport Park in Centurion on December 29 2021.
Image: Lee Warren/Gallo Images

India are closing in on victory against SA in the Boxing Day Test at SuperSport Park in Centurion.

They go into the final day on Thursday, which is expected to be disrupted by scattered thunderstorms, with momentum to claim the remaining six Proteas wickets and take a 1-0 lead in the three-match series.

The teams are in this situation because when India were bowled out for 174 in their second innings they enjoyed a substantial lead of 304 to give SA the target of 305.

At stumps on Wednesday, India had the upper hand after claiming the important scalps of top-order batters Aiden Markram, Keegan Petersen and Rassie van der Dussen and nightwatchman Keshav Maharaj.

Markram was bowled out for a single run, Petersen added 17, Van der Dussen made 11 and Maharaj managed eight as they struggled to cope with the breathtaking pace of Mohammed Shami, Jasprit Bumrah and Mohammed Siraj.

Bumrah ended the second innings with the wickets of Van der Dussen and Maharaj while Shami and Siraj accounted for Markram and Petersen respectively.

The Proteas will resume on Thursday with skipper Dean Elgar, who registered his 18th half-century fighting what looks like a losing battle on 52, with Temba Bavuma, who did not take the field as Maharaj’s wicket was the last ball of the day.

There was a time in Wednesday's third session when Van der Dussen and Elgar stood their ground against the Indian pace attack with a partnership of 40 off 137 but that stand was broken when former was bowled by Bumrah.

The odds are heavily stacked against SA as they have only once successfully chased down a target of 300 or more in the fourth innings - in 2001-02 against Australia where they scored 335 in Durban.

It is also worth mentioning that it has been only once that  any team successfully chased down a target of 300 or more against India, achieved by Australia in the 1977-78 season in Perth.

Earlier in the day, Kagiso Rabada and debutant Marco Jansen claimed four second-innings wickets each and they were supported by Lungi Ngidi with two of his own.

India's batters did not cover themselves in glory in the second innings as Rishabh Pant was their top scorer with 34 and closest to him was opener KL Rahul on 23 runs.

But that doesn’t matter much now as the tourists have the Proteas with their backs against the wall and look set to finish the job on Thursday.