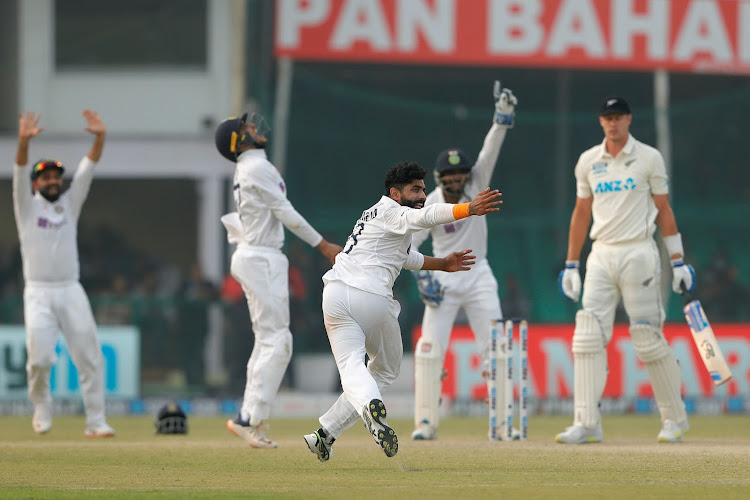 India's head coach Rahul Dravid dismissed the suggestion that the timing of their declaration may have cost them victory in the drawn opening Test against New Zealand.

India declared their second innings on 234-7 on Sunday, setting New Zealand a victory target of 284 at Kanpur's Green Park Stadium.

New Zealand's final batting pair of Rachin Ravindra and Ajaz Patel saw out the last 52 balls to force a draw in the first match of the two-test series.

“I don't think so. That's not my reading of the game,” Dravid, who took over the coaching role earlier this month, said when asked if India had delayed their declaration too long.

“Till half an hour before we declared, we were under pressure. All three results were possible, to be very honest with you.”

India were 51-5 in the second innings before Shreyas Iyer stitched 50-plus partnerships with Ravichandran Ashwin and Wriddhiman Saha to prop up the innings.

“I thought we timed that declaration really well. We needed that partnership which was critical for us — from 167-7 to get to 234-7 was absolutely necessary,” Dravid said of the Saha-Patel stand.

“I thought we did it well, we timed it well. We managed to get a wicket yesterday and we came very close today.”

Meanwhile, the cricket connoisseur in New Zealand captain Kane Williamson was particularly pleased by the “old school Test cricket” his side played to pull off the thrilling draw.

“For us, it was sort of some old school Test cricket trying to bat out a day and survive, which isn't seen all that often in recent years,” Williamson said after the see-saw contest.

“It was good fun and nice to come away with the draw in the end.”

While the umpires kept checking the light-meter, India continued with spin from both ends and deployed seven fielders about the bat, ramping up pressure on the last New Zealand pair.

“I think India were 20-something overs ahead of their over rate, which is unheard of. They were getting through their overs very quickly,” Williamson added.

“We knew that it was going to be a real scrap throughout the day as scoring was tough ... It was a really good fighting effort to bat out the day against an amazing spin bowling attack.”

Williamson termed Ravindra as an “all-round package” and said the experience would stand the 22-year-old in good stead.

“An amazing experience to have in his first Test match, and to be there at the end is something he'll remember for a long time,” Williamson said.

The second and final Test is scheduled in Mumbai from Friday. — Reuters