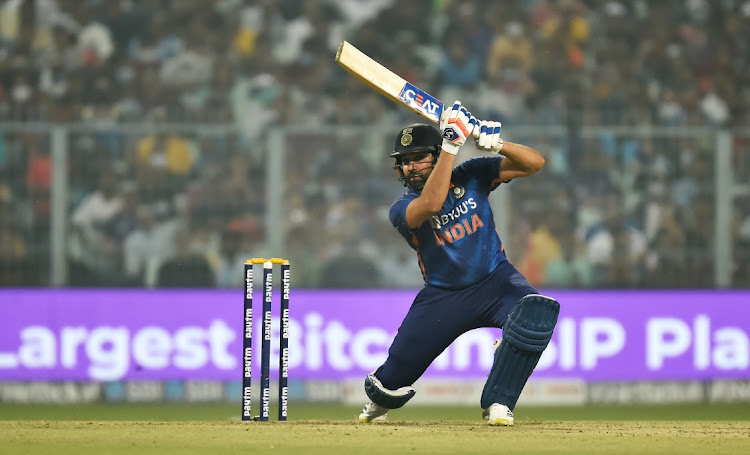 Rohit Sharma of India plays a shot during the Third T20 International against New Zealand at Eden Gardens on November 21, 2021 in Kolkata
Image: Pankaj Nangia/Getty Images

India romped to a 73-run victory over New Zealand in their third and final Twenty20 International in Kolkata on Sunday as head coach Rahul Dravid began his tenure with a 3-0 series sweep.

Home captain Rohit Sharma smashed 56 off 31 balls to fire the hosts to a strong 184-7 in the dead rubber at Eden Gardens.

Martin Guptill made a breezy 51 but New Zealand, runners-up at the recent Twenty20 World Cup, were all out for 111 in the 18th over.

“It's nice to start well,” Dravid, who inherited the coaching reins from Ravi Shastri after the World Cup, told the official broadcasters.

“But we have to be realistic about this win and keep our feet on the ground.”

“It's been really good to see some of the younger guys come through.”

Opting to bat, India plundered 69 runs off the first six overs and, after a mid-innings blip, 50 off the last five to post a strong total.

Having taken over as India's 20-overs captain after Virat Kohli relinquished the role after the World Cup, Rohit combined with Ishan Kishan (29) to give India a flying start.

Mitchell Santner (3-27) dismissed Kishan and Suryakumar Yadav in the same over and then Ish Sodhi took a sharp return catch from Rohit to bring some relief for the tourists.

India accelerated in the last five overs with Deepak Chahar providing the late assault with 21 off eight balls.

When they returned to defend the total, spinner Axar Patel (3-9) removed Daryl Mitchell and Mark Chapman in the same over to rattle New Zealand.

Guptill refused to get bogged down though, racing to a 33-ball fifty to keep New Zealand on course.

The opener clobbered four sixes and contributed 51 of the 69 runs that the tourists scored in the first 10 overs.

But once Yuzvendra Chahal removed Guptill in the 11th over, India had the game in the bag.

The teams will now lock horns in a two-Test series beginning in Kanpur on Thursday. — Reuters