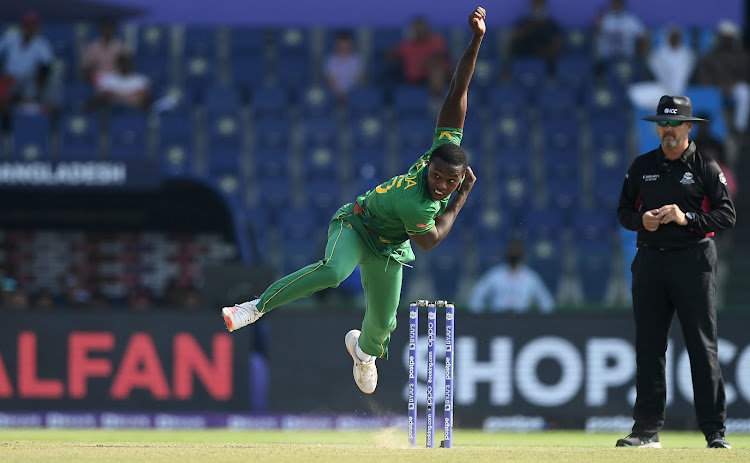 Proteas frontline bowler Kagiso Rabada has come out in defence of captain Temba Bavuma who has come under fire from a section of fans after a slow start with the bat at the ICC T20 World Cup.

In his first two matches, against Australia and West Indies, Bavuma was lean on the runs, managing only  scores of 12 and two.

The South African skipper, who was widely praised for the way he handled the Quinton de Kock debacle, has returned to form with scores of 46 against Sri Lanka and an unbeaten 31 during the six-wicket win over Bangladesh on Tuesday in Abu Dhabi.

Speaking after his player-of-the-match performance, where he returned with impressive figures of 3-20 in the Proteas’ thrashing of Bangladesh, Radaba said their focus was on doing well at the tournament.

“There is nothing more I can say about Temba because the results are there,” said Rabada, who claimed his three wickets during a furious opening spell that helped SA to the crucial win that keeps them on course for a place in the semifinals.

“You will always have critics and it is something that we have made peace with. You can’t take the good without the bad, and at the end of the day we actually put ourselves under more pressure than the public does.

“We are the ones who want to do well, we want to do well for ourselves more than anyone else wanting us to do well. Whatever people say outside the game it’s OK because we can’t control that.

“People are entitled to their opinions, and in saying that, we see a lot of value in people who genuinely support us.”

After the win over Bangladesh, the Proteas have recorded three wins from four matches but they must overcome on-form England in their showdown on Saturday to keep their semifinal hopes alive.

“It feels great to have beaten Bangladesh. What we have shown is that we have had different individuals stand up in different games and I think that’s been the key. We are performing as a team and we are chuffed about today [the win over Bangladesh],  but I'm certainly not going to think about cricket tomorrow [Wednesday] until we have to train again.

“But when the time comes, I will regroup and strategise for England and hopefully it is going to be a good game.”

After four matches, Rabada has taken five wickets and he wants to continue contributing.

“Wherever I can contribute to the success of the team, I’ll take it even if I am not taking wickets. But on a personal note, it feels good to take wickets, especially in the powerplay where I can make inroads.

“That is what I always strive to do, every day we put in the work and what I have come to learn about the game is that you work so hard and sometimes things don’t go for you. But if you keep on working, more often than not it will go for you.”