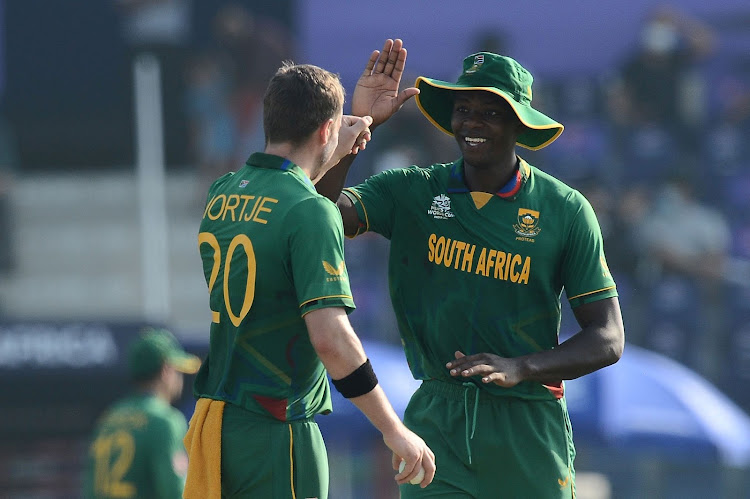 A menacing Proteas display of fast bowling coupled with some patient batting was enough to see the Proteas take a step closer to the semifinals with a six-wicket victory over Bangladesh in their Group A super 12 fixture in the T20 World Cup on Tuesday.

The Proteas seamers, Kagiso Rabada up front, followed by Anrich Nortjé were relentless in their destruction of their opponents’ batting line-up taking six wickets between them to limit the Tigers to 84 inside 19 overs on a seamer friendly pitch at the Sheikh Zayed Stadium in Abu Dhabi.

Rabada ripped through the top order to claim three wickets in the space of six balls inside the powerplay to eventually finish with three for 20 while Nortje backed him up with three for eight later on.

In reply, the Proteas, despite a wobble at the top of the order, managed to chase down the score with 39 deliveries remaining.

SA now are second in Group I, ahead of Australia, after their third win in four matches and face table-toppers England in their final group match on Saturday.

Rabada took two quick wickets as he accounted for Naim Sheik for nine, caught by Reeza Hendricks, before he trapped Soumya Sarkar for a first ball duck.

Rabada was back in action in his third over as he sent Muhsfiqur Rahim back to the dugout for the another first ball duck, again caught by Hendricks, as they added a further four runs to end the powerplay on 28/3. 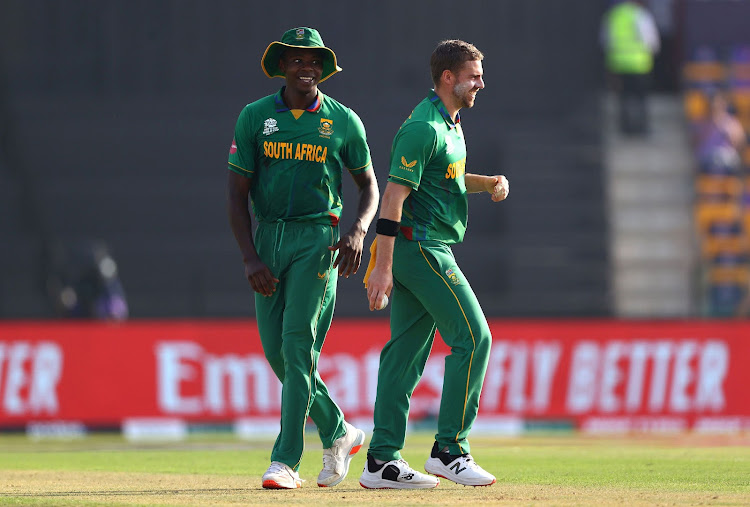 Captain Mohammad Mahmudullah (3) was back in the hut, caught by Aiden Markram off the bowling of Nortjé before Dwaine Pretorius castled Afif Hossain for the third duck of the innings with the score on 34 in the ninth over.

Reeling on 40/5 after 10 overs, things did not get easier as Liton Das, who battled his way to 24 off 36 balls, was trapped leg before wicket off the bowling of Tabraiz Shamsi and the dismissal of Shamim Hossain (11), caught by Keshav Maharaj, gave Shamsi a second wicket in the 16th over.

Taskin Ahmed (3) was run out by a Temba Bavuma direct hit off the bowling off Shamsi in the 18th over with their score on 77, before Nortje, who is yet to be hit for a six in the tournament, cleaned up the tail.

Chasing the modest total, the Proteas were in a spot of bother early on as they lost their three openers for just 33 runs.

Reeza Hendricks (4) was the first of two Taskin wickets when he was trapped in front of his stumps.

Mahedi got a ball to skid past the outside edge of Quinton de Kock’s bat, crashing into the stumps with the left hander on 16 before Markram was dismissed by Taskin for nought with the score on 33.

Bavuma and Rassie van der Dussen added 47 for the fourth wicket before Van der Dussen was caught by Shoriful Islam off Nasum Ahmed for 22.

David Miller (5) hit a boundary to end the match as he and captain Bavuma (31 not out) made sure their team got over the line.