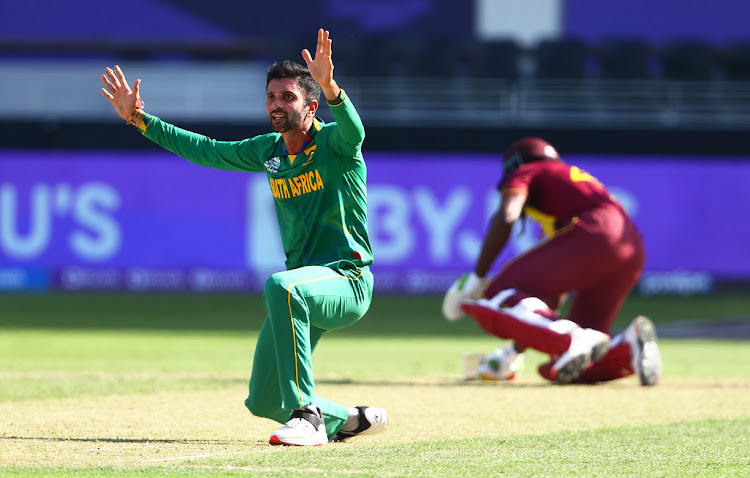 Proteas spinner Keshav Maharaj has said that the events of the last few days regarding Quinton de Kock have bought the team together ahead of their must-win ICC T20 World Cup clash against Sri Lanka on Saturday.

De Kock caused an uproar on Tuesday when he made himself unavailable for SA’s second World Cup match against the West Indies after the Proteas players were ordered to take the knee out of respect for the Black Lives Matter (BLM) movement.

De Kock has since apologised.

The Proteas take on Sri Lanka at Sharjah Cricket Stadium where they will be looking to register their second win, especially after the West Indies beat Bangladesh in another Group 1 match on Friday.

Maharaj said SA are more united as a team from the saga.

“We drew a lot of inspiration from the way we have reacted in the past when situations were thrown at us,” he said in SA’s prematch press conference on Friday evening.

“I think this has just made us bond and made us stronger. You’ll probably see a lot more energy than you have seen over the last two days, which is hard to believe.

“It has brought us together, the boys are matured and are adults and able to handle situations and use this to fuel more energy on the field through performances.

“It has been a tough week but, like I said, the boys are mature and adult enough to adapt to the situation. The stakes were really high at training on Friday afternoon and our focus is back on the cricket.”

It remains to be seen if De Kock will walk back into the team after he missed the last match against the West Indies.

“Obviously that is down to the selectors in terms of whether he is going to start or not but I know that if he gets the opportunity he’ll definitely slot back into the team,” Maharaj said.

“We know what ‘Quinny’ can do with the bat and he showed that in Sri Lanka where he was named the player of the series. If he does get the opportunity I am sure he will fit straight into the team.”

The Proteas take on Sri Lanka on the same ground where the West Indies beat Bangladesh on Friday and Maharaj does not know how the pitch is going to behave.

“It looks like a good surface, just maybe a bit low from what we have seen in the game between Bangladesh and the West Indies. Having said that, we are not sure if it is going to be a fresh or used wicket on Saturday.