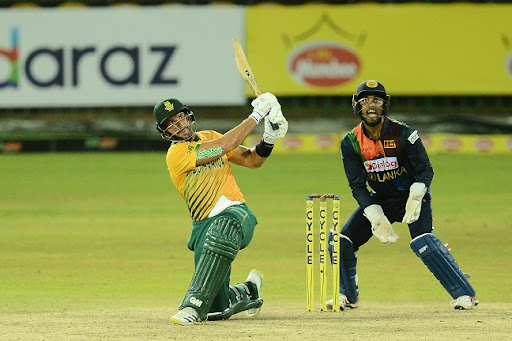 SA beat Sri Lanka by 28 runs at the R. Premadasa Stadium in Colombo on Friday to take a 1-0 lead in the three-match T20 series.

SA's innings was anchored by Aiden Markram (48), Reeza Hendricks (38) and Quinton de Kock (36) as they reached 163/5 after stand-in Keshav Maharaj won the toss and chose to bat.

With ball in hand, Bjorn Fortuin, Anrich Nortjé, Keshav Maharaj, Tabraiz Shamsi and Dwaine Pretorius claimed a wicket each as the Proteas restricted Sri Lanka to 135/6 in their allotted 20 overs.

The Proteas started the match with promise where Quinton de Kock, who was making a return to the team after missing the ODI series, put together a strong opening partnership of 73 off 59 with Reeza Hendricks.

Their partnership was broken in the 10th over when Charith Asalanka caught De Kock at deep midwicket from the bowling of Wanindu Hasaranga to give Sri Lanka the much-needed breakthrough.

Hasaranga was back in the thick of things a few overs later when he removed Hendricks having scored 38, and Maheesh Theekshana trapped Heinrich Klaasen for only two runs.

In the back end of the SA innings captain Dasun Shanaka got the wicket of Markram two runs shy of his half-century and he was soon followed by David Miller, the victim of Dushmantha Chameera.

The first wicket to fall for Sri Lanka was Avishska Fernando who was run out by quick-thinking Nortje and stand-in captain Maharaj removed Bhanuka Rajapaksa for a duck with his first ball in T20 cricket.

Tabraiz Shamsi joined the party with the wicket of Asalanka (6) and it became a procession with Shanaka (16), Wanindu Hasaranga (0) following quickly, the Lankans' most notable scorer being wicketkeeper Dinesh Chandimal with an unbeaten 66.