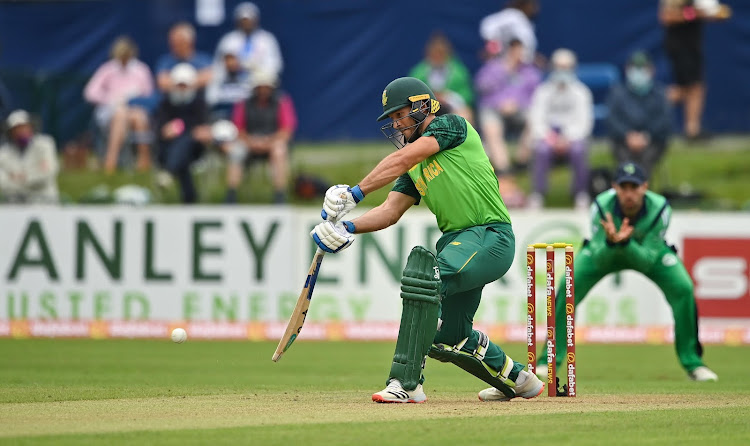 NEW PLAN: Janneman Malan of SA during the ODI against Ireland at The Village in Dublin on Tuesday
Image: Seb Daly/Gallo Images

Proteas opener Janneman Malan says the team have identified errors in their defeat to Ireland and will be looking to rectify them in the series finale on Friday.

In the absence of explosive top-order batsman Quinton de Kock, Malan starred with the bat, scoring 84 runs off 96 balls in a game where captain Temba Bavuma admitted his side had been totally outplayed.

The 43-run defeat saw the Irish claim their first win over SA to take a 1-0 lead in the three-match series after the first clash on Sunday was abandoned due to rain.

Malan said the spirit was a bit down after the defeat, but they were working on how to set the record straight.

“One of the things in the life of a sportsman is to get things like this out of your head and look forward to your next challenge,” he said.

“We definitely don’t want to leave this tour with a series loss.

“So there is no other option for us than to win the next game and we back ourselves to do it.

“We just need to show a bit more hunger and motivation, throw ourselves around in the field and have clear plans,

“Hopefully we learnt a bit from the death overs as well and then batting.

“Just set it up and have clear processes and execute,” the Western Cape batsman said.

Malan said he and Rassie van der Dussen (49) had looked set to put up a good platform for the team to chase down their hosts’ total.

“Ideally, you want me or Rassie in at over 40 batting with the guys.

“Obviously, it would have been great if we could have batted through.

“I needed to score a big hundred, but I never did that, so I failed the team in that aspect, being in.

“We didn’t have an in man during the last 10 [overs] because we did back ourselves to get 100 in the last 10, but you kind of need a good platform and an in batsman.

“The bang-bang wasn’t good, losing me and Rassie within the space of an over,” the 25-year-old said.

Malan backed the fielding unit to come out and show the hunger they possessed and said they would back the bowlers, show energy and work hard to try to claim victory.

“Sometimes you just have days like that — obviously you don’t want to drop three catches in an innings.

“I want to say, that happens, but it also can’t happen too much because we are a professional unit.

“So I think the guys will definitely come back and show the hunger we need to show in the field, backing the bowlers, having good energy and moving around, and that translates into the batting as well.”

Malan said the difference between the SA and Irish batting had been how the teams executed their skills in the final phase of each innings.

“They scored 100 off the last 10 and I think they scored close to 60 in the last four overs, but that comes with having some batsmen in and not having new batters trying to hit all the time.

“So I think if we could have taken it a bit deeper, we could also have put that kind of pressure on them, but it happens quickly in a game of cricket.

“But we can’t be putting up performances like this, so we will try to correct it as well as we can,” the right-hander said.