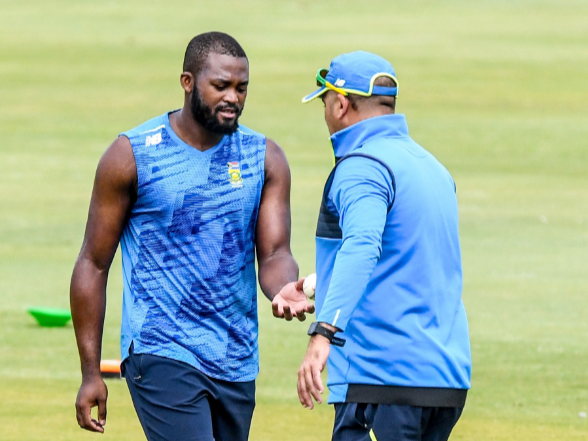 The Proteas face a serious test of their reserve strength in the third and deciding ODI at SuperSport Park in Centurion on Wednesday (10am).

Captain Temba Bavuma will be without regular stars Quinton de Kock, Kagiso Rabada, Anrich Nortje, Lungi Ngidi and David Miller after the quintet left for the riches of the Indian Premier League this week.

So, there will be at least five changes to the team and possibly six with Keshav Maharaj being tipped to replace Tabraiz Shamsi.

Losing three quality seamers will result in the attack coming under considerable pressure to perform especially against a run-hungry Pakistan batting order.

SA bowling coach Charl Langeveldt believes it is important to have one bowler setting an aggressive tone at the start.

“For Ana [Anrich Nortje], we were looking to bring in an enforcer, a guy that can bowl with good pace.

“We got that guy in Daryn Dupavillon.

“And then also the guys like Lutho Sipamla, we’ll look at them. But we haven’t made a final decision on a team yet,” Langeveldt said on Tuesday.

Langeveldt admitted the team would miss the subcontinent-bound five but said it presented chances for others to impress.

“Yeah, it’s a massive loss but in saying that it’s an opportunity for the guys on the fringes.

“In 2023, we are going to play a World Cup so we want to see if our big names get injured that we have someone who can step up.”

“Andile is an important cog in the wheel as the guy who can come in and bowl at the death.

“But, going forward, I want three guys more who can bowl at the back end like Lungi, Anrich and KG. So the captain has options.”

So, how will the greenhorn Proteas attack subdue the Pakistani batsmen?

“It would be nice if we can win the toss for a change,” Langeveldt said, laughing.

“In saying that, that’s cricket. The game isn’t decided on a toss.

“We just have to bowl well.

“We’ve started well and then for some reason they’ve come hard at our first-change bowlers.

“That’s a thing we need to improve if we want to win World Cups.

“The first-change bowlers know they need to be able to control the run rate.”

Heinrich Klaasen is set to keep wicket in place of De Kock, with Kyle Verreynne and Janneman Malan expected to fill the two batting spots.