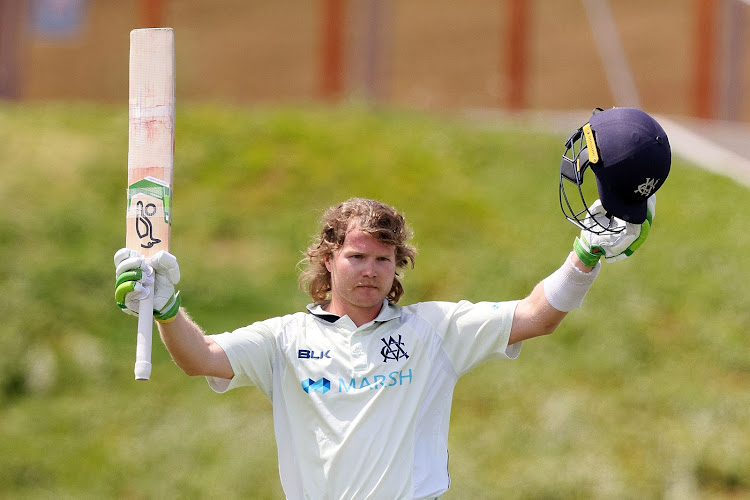 William Pucovski of Victoria celebrates after reaching his double century during day two of the Sheffield Shield match against Western Australia at Karen Rolton Oval on November 9, 2020 in Adelaide
Image: Daniel Kalisz/Getty Images

Australia selector Trevor Hohns has backed Will Pucovski's fitness to make his Test debut against India, with the batting talent passing "wellbeing" checks to be included in the squad on Thursday.

Pucovski has been in red-hot form, scoring 495 runs in two Sheffield Shield matches for Victoria, but the 22-year-old has a history of mental health problems when on the cusp of international selection.

The right-hander was widely tipped to be included in the Test series against Pakistan last summer but ruled himself out of selection due to wellbeing problems.

He also withdrew himself from the Test squad against Sri Lanka during the 2018/19 home summer and took a six-week break from cricket for his mental health.

The much-anticipated four-Test series against Virat Kohli's side pits top-ranked Australia against third-ranked India and would be a baptism of fire for any young debutant.

But Hohns said Pucovski was ready and expected him to be available from start to finish.

"As far as Will goes, and the same with all players, we obviously check their health and wellbeing.

"We do the necessary checks (and) Will's good to go, so we're hopeful that he'll be fine all the way through."

Pucovski was among five uncapped players named in a bumper 17-man squad for the series against India which starts December 17 at Adelaide Oval.

He is battling incumbent opener Joe Burns for a spot in Tim Paine's team.

Burns and Pucovski were both selected in an Australian 'A' squad to play an Indian 'A' side in a three-day tour match at Sydney's Drummoyne Oval from December 6 followed by another three-day warmup against India proper at the Sydney Cricket Ground from December 11.

The pair will effectively be in a shootout, with Hohns saying performances in the 'A' games could decide who plays in the test series.

"Of course it would be nice to have everybody in form right now but we still have those Australia A games to have a look at (players) prior to selection for the first Test match," he said.