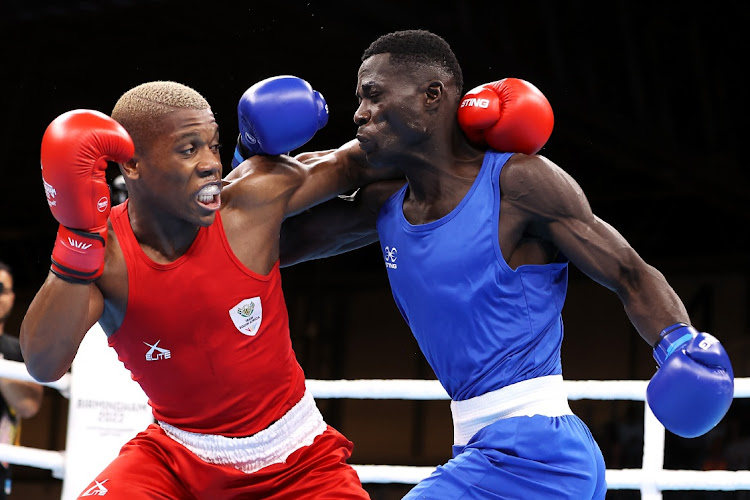 Simnikiwe Bongco (red) in action in his tournament opener against Foday Badjie of The Gambia.
Image: Mark Kolbe/Getty Images

The Duncan Village and Eastern Cape Academy of Sport fighter also had the satisfaction of dropping Kemrond Moses of Grenada during their three-round contest, which he won by unanimous decision with all five judges scoring it in favour of the South African.

The victory means Bongco advances to the semifinals where he is guaranteed a bronze even if he loses. He will take on 19-year-old Callum Peters of Australia on Saturday.

In the other eliminator England’s Lewis Richardson, runner-up at the European championships, takes on Sam Hickey of Scotland.

Team SA had achieved only a single boxing medal at the previous three Commonwealth showpieces, with Tulz Mbenge taking a welterweight bronze at Glasgow 2014.

The rest of the medals were bronze.

Open boxing, as the amateur game is called now, has been in a state of disarray in SA, with no fighters getting to the past two Olympics. In 2016 that was the fault of the SA Sports Confederation and Olympic Committee's harsh selection criteria.

But for Tokyo 2020 the SA National Boxing Organisation (Sanabo) was to blame after failing to get a team to the African Olympic qualifying tournament.