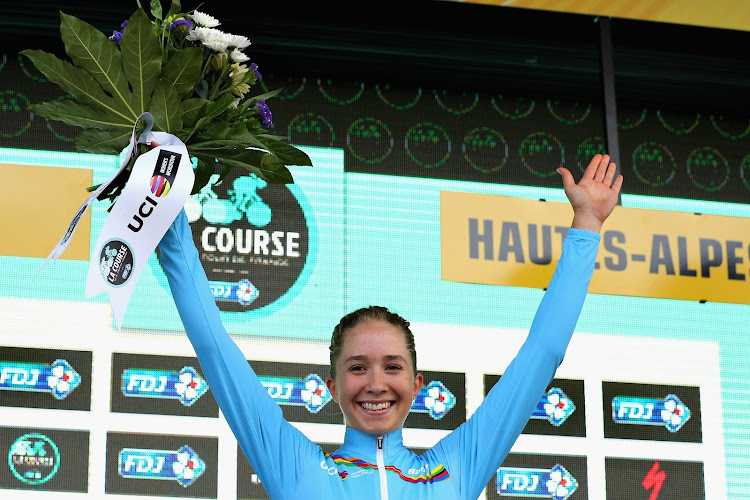 Vos had seized the yellow jersey on Monday after winning Monday's second stage but FDJ Suez Futuroscope rider Ludwig kept her at bay to win the hilly 133.6 kilometre ride from Reims to Epernay in a time of three hours and 22.54 minutes.

“I don't think I realise it yet. I actually didn't come into the last corner in the best position but I kept fighting. What a victory, man,” said Ludwig, who broke away from a select group towards the end and held firm for the victory.

“This is for my team. They did such a good job yesterday and kept believing in me. I love you guys.”

Victory was especially sweet for the FDJ Suez Futuroscope after Marta Cavalli, one of the favourites, abandoned the race on Monday after being involved in a high-speed pile-up towards the end of stage two.

“Losing Marta and crashing and have to come back... I just love how the team kept the fighting spirit,” Ludwig added.

“We knew that today was a super good day and if I had the legs I could try to go for the win. To actually do it and be a stage winner in this jersey? Oh my God. It doesn't get better.”

SA's Ashleigh Moolman-Pasio (SD Worx) was third behind Vos, who stayed top of the general classification with a total time of 8:30.36.

“I think Cecilie definitely had the best legs in the end, so I can't be disappointed but I just gave it all to be up there in the mix,” Vos said.

“I don't think I can be disappointed. We tried our best. We knew it was going to be hard over the climbs. I had to dig deep. The team put me in a perfect position going into the final but when it really opened on the steep climb I had to let a gap.”

Pre-race favourite Annemiek van Vleuten finished the stage in 10th and later said that she was struggling with her health, with difficulty to eat and drink on Monday. — Reuters