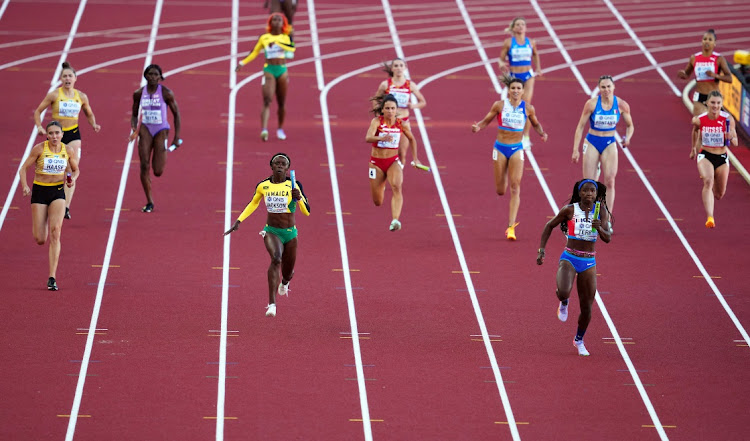 Twanisha Terry of the US, Jamaica's Shericka Jackson and Germany's Rebekka Haase in action during the women's 4x100m relay final.
Image: REUTERS/Aleksandra Szmigiel

Jamaica fielded the three medallists from the women's 100m in Saturday's World Championships sprint relay but that was still not enough to prevent a super-slick US quartet taking gold to raise the biggest cheer of the week at Hayward Field.

Jamaica looked formidable after bringing in their "big three" — Shericka Jackson, Shelly-Ann Fraser-Pryce and Elaine Thompson-Herah — with lead runner Kemba Nelson the only survivor from their semifinal team.

The US introduced Abby Steiner to join Melissa Jefferson, Jenna Prandini and Twanisha Terry, and after a superb series Terry ran a terrific anchor leg to bring them home in 41.14 seconds - the fifth-fastest in history.

Jamaica were second in 41.18 - the sixth-best ever - after losing fractions on a couple of stretched changeovers.

Britain were in the medal hunt until 200m bronze medallist Dina Asher-Smith pulled up injured at the end of her third leg, allowing Germany to storm through for a surprise bronze in 42.03.

Jamaica and the US had each won four of the previous eight world titles and between them eight of the last 10 Olympic golds.

Saturday’s head-to-head was as mouth-watering as any of those, with the Americans hoping their well-honed teamwork could make the difference against a squad that they hoped might just be a metre of pace down after their gruelling individual campaigns.

It proved to be the case as Jamaica twice had to slow a touch to collect the baton, as the Americans made no mistakes.

Prandini ran a brilliant third leg and Jamaican anchor Jackson, two days after her 200m gold, could make no impression on Terry as the US took their Eugene gold tally to 10.

It was a stunning consolation for Steiner, who came into the championship as a medal favourite in the 200m but finished fifth in the final. "This is the most fun race of my life," she said. "I never scream that loud during a race. Hayward magic is a real thing."

Jefferson said: “It was not expected of us today and I am glad we pulled it through. We have a lot of confidence and I knew we would show the world what we are capable of."

Terry said the victory lap was amazing."To be able to feel the energy form the crowd, to shake hands, sign autographs. It's just an amazing feeling," she added.  "The race was electrifying. The stadium went crazy. We just brought it home.”

Nigeria set an African record of 42.22 to come fourth while Spain posted a national record 42.58 in fifth having also set a new mark in the semis. 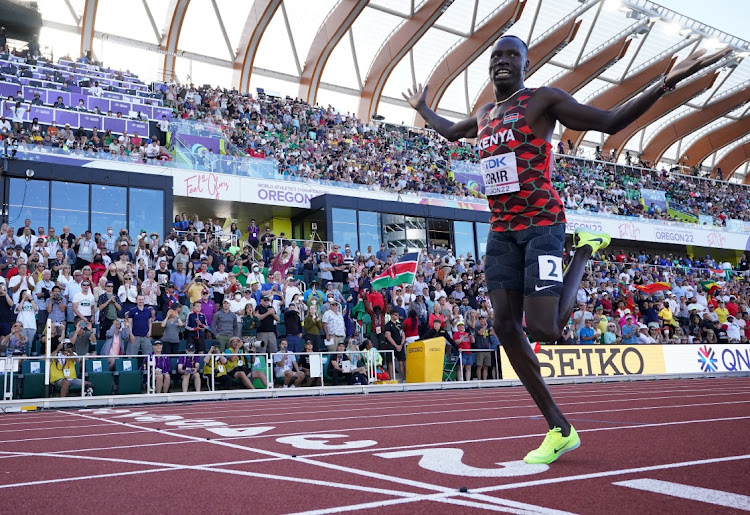 Kenya's Olympic champion Emmanuel Korir ran a textbook tactical race to win the world 800m title on Saturday as he peaked at just the right time after a wretched season.

Korir arrived in Eugene with barely a race to his name but ran himself into form through the rounds. In Saturday's final he sat near the back of the tightly-bunched pack for 600m before putting his foot down, sweeping past most of them on the bend then overhauling fading leader Marco Arop on the home straight.

"I was expecting a faster race, but I won and I am very happy," said Korir. "I knew there were some guys close behind me in the last 100m. I was expecting someone to come, but no one did.

Korir's win took Kenya's gold medal tally in the event to seven, though this was their first since 2015

Arop ran a brave race, hitting the front early and stretching the field, and said his bronze felt like redemption after failing to reach the Olympic final when fancied for a medal.

"It rights some of the wrongs from last year — I feel I had to take a step back to take two steps forward," he said. "Last year was a big learning lesson and I am glad I was able to come back from that. I knew if I left it to the last 150m I would have had some trouble closing. I tried to make my move early and take some people out of the race.

"Korir was strong enough to come back. Both medallists are strong finishers so I had to make sure I held some other runners and I think I gave it my all. Unfortunately, it was not enough to win gold, but good enough to win come back with a medal."

Korir's win took Kenya's gold medal tally in the event to seven, though this was their first since 2015.

"My time is not now but it will come," he said. "But I am so happy for Korir winning and bringing gold to Kenya." 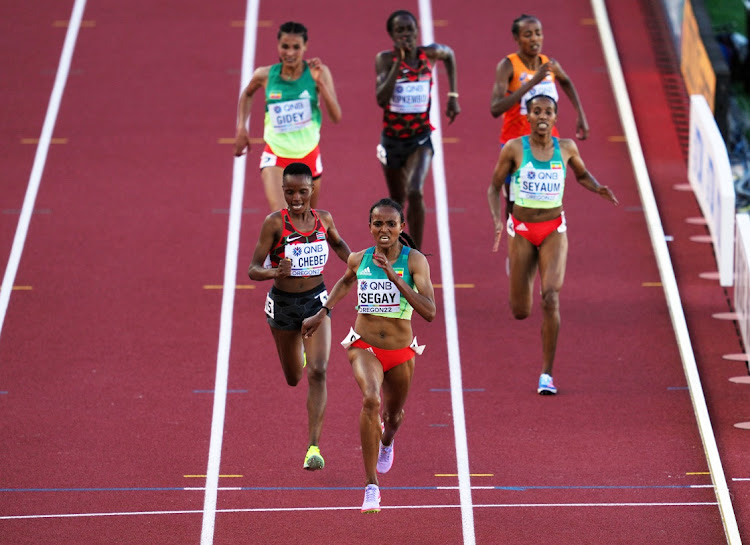 Ethiopian Gudaf Tsegay held off late challengers to win the women's 5,000m at the world championships on Saturday as world record-holder Letesenbet Gidey faded down the straight to miss the podium.

Tokyo bronze medallist Tsegay traded the lead with compatriot Gidey, the world 10,000m champion, throughout the race until the pack took off for the final lap.

The Netherlands' 5,000m Olympic champion Sifan Hassan, known for her ferocious kick, picked up the pace before delivering a challenge with 200m to go as she wove to the inside, but could not maintain her speed as Tsegay charged down the final straight.

"I have been training well for 1,500m and this helps spring on the home stretch," said Tsegay, who collected silver in the 1,500m earlier in the meet.

This win is for all of Ethiopia

"This win is for all of Ethiopia. I was trying to control the race coming from the first place during the run so it was very hard for me ... I felt in shape and my victory confirms it was a good plan."

Kenyan Beatrice Chebet moved up in the final 200m for silver and Ethiopian Dawit Seyaum finished with bronze.

"It was a matter of tactics. I was well positioned," said Chebet. "This medal will make a good difference for me."

It was the fourth gold for Ethiopia in Eugene, Oregon, who have 10 medals total and sit behind the US in the medals table.

Seyaum, who kept Doha silver medallist Margaret Kipkemboi off the podium, said it was a special performance for her after dealing with injuries for five years. "I hoped and I also expected to become a medalist in this event. So I trained well and prepared myself hard for any kind of a medal," she told reporters.

Hassan had played down expectations ahead of Eugene, having scarcely competed after the mental and physical exhaustion of her remarkable distance double at the Tokyo Games, and told reporters she had only began to train about two months ago.

"I did my best and I gave everything. I did the race smart, did not make any mistake," she said. "I wanted to get a break for my mental part because athletics is not only about running but also about motivation. It is so hard to get motivated again. I took almost seven months break. I am happy to be back and I will try for more golds next year."

After the race a fan ran onto Hayward Field holding what appeared to be a Tigray flag and picked up both Tsegay and Gidey before being removed by security.

A conflict erupted in November 2020 between rebellious forces from the Tigray region and the Ethiopian government. 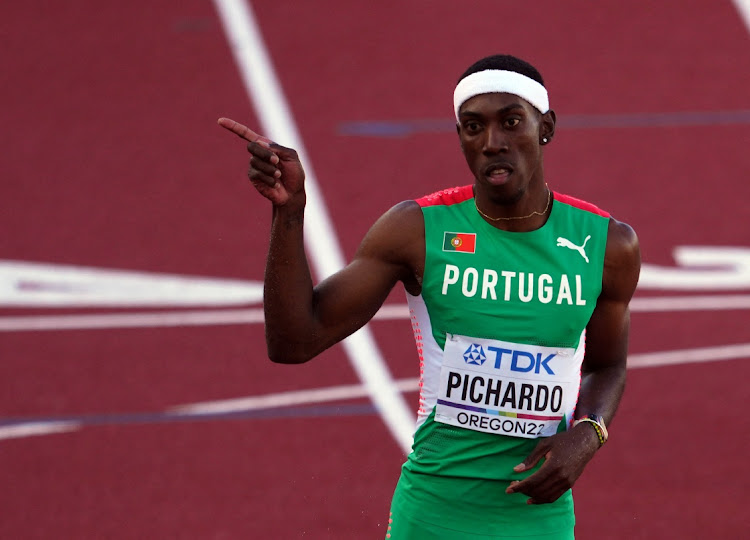 Portugal's Pedro Pichardo continued his dominance in the men's triple jump on Saturday by adding his first world championships title to the Olympic gold he won in Tokyo. The 29-year-old, a two-times world silver medallist for Cuba before switching allegiance to Portugal, jumped a world-leading 17.95m on his first attempt to take the top spot.

"The opening 17.95m ended up being the winning mark. I opened strongly," Pichardo said. "This world title was elusive to me. I had two silver medals and tried to win gold and achieved it today. This title means a lot. I am progressively winning all possible titles, from Olympic gold to the world title."

Pichardo becomes Portugal's first world champion in the event since Nelson Evora in Osaka in 2007.

Burkina Faso's Hugues Fabrice Zango finished a distant second with an effort of 17.55m. "I am happy to be on a World Championships podium," said Zango, whose won bronze in Doha and Tokyo. "It's always a source of joy to be competitive in any meet I am entered."

American Will Claye, who won silver in 2017 and 2019, finished 11th, while compatriot and four-times world champion Christian Taylor failed to qualify for the final. 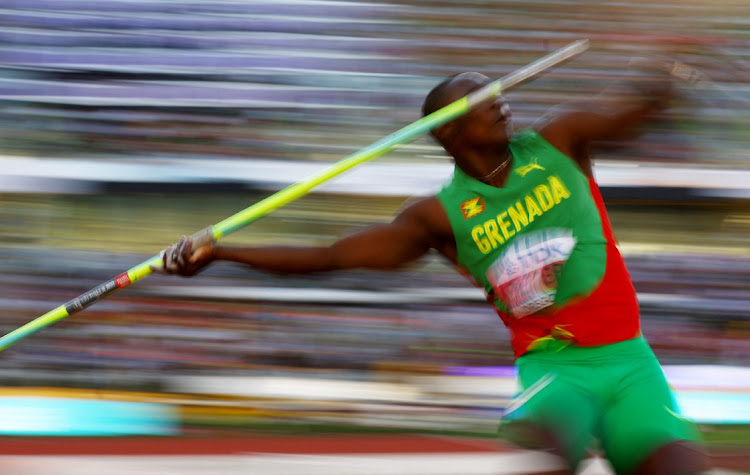